Haï Ari (in French Association des Scouts Armeniens, in English Association of Armenian Scouts) was a member of the World Organization of the Scout Movement from 1928 to 1997. The organization was recognized in exile, with headquarters and approximately 1,100 members in France. 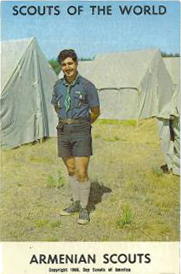 In 1929, World Scouting recognised the association of Armenian Scouts (Haï Ari), based in France. While the Association did not have its own territorial base, it was the exception to the rule, remaining a member of the World Organization and the European Scout Region.

In 1978, Dr. Kourkène Medzadourian was awarded the Bronze Wolf, the only distinction of the World Organization of the Scout Movement, awarded by the World Scout Committee for exceptional services to world Scouting.

As soon as the independent Republic of Armenia emerged in 1991, the French-based association of Armenian Scouts expressed its wish that Scouting in Armenia should become a part of World Scouting as soon as possible. It helped in the process of creating a national Scout organization in Armenia.

The Scout Motto is "Misht Badrast", translating as "Always Ready" in Armenian. The Armenian noun for a single Scout is Սկաուտ, transliterated Scaut.

In addition, there are USA Girl Scouts Overseas in Yerevan, serviced by way of USAGSO headquarters in New York.

Retrieved from "http://en.scoutwiki.org/index.php?title=Hayastani_Azgayin_Scautakan_Sharjum_Kazmakerputiun&oldid=34188"
Categories:
Cookies help us deliver our services. By using our services, you agree to our use of cookies.