This article deals with the most common use of the word hammock, a sling for sleeping or resting in. Particularly in the southern United States, a hammock can also mean a piece of thickly wooded land, usually covered with bushes and vines. For information about the band of the same name, see Hammock (band). For other meanings, see Hammock (disambiguation).

The hammock is a device used to sleep or rest in. It consists of cloth or a network of twine or thin rope, either natural or synthetic, which is stretched between two firm points. 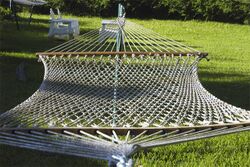 The hammock was developed in Pre-Columbian Latin America and continues to be produced widely throughout the region, including among the Urarina of the Peruvian Amazon. Though it is unknown who invented the hammock, many maintain that it was a device created out of tradition and need. The English language derivation of hammock and various European equivalents is borrowed from the Spanish hamaca or hamac around 1700, in turn taken from a Taíno culture Arawakan word (Haiti) meaning "fish net."[1][2]

They were not part of Classic era Maya civilization; they were said to have arrived in the Yucatán from the Caribbean less than two centuries before the Spanish conquest. They are made of various materials (including palm-based in western Amazonia), and the quality depends greatly on the thread and the number of threads used. In Mexico, hammocks are made in villages surrounding the capital city Mérida and are sold throughout the world as well as locally. Mayan hammocks are made on a loom and are hand woven by men, women and children. Hammocks are so symbolically and culturally important for the Yucatecans that even the most humble of homes have hammock hooks in the walls; in rural El Salvador, a family home may have multiple hammocks strung across the main room, for use as seating, as beds, or as sleep-swings for infants.

There are currently a wide variety of hammocks available. There are hammocks that are designed specifically for backpacking and include mosquito netting along with pockets for nighttime storage. There are hammocks made out of thin and lightweight material which makes them ideal for taking on daytrips. Other hammocks include self-standing metal or wood structures that support the hammock. Although many people today purchase them premade, it is also possible to make your own hammock.

Hammocks have also traditionally been used by sailors on sailing ships; since a hammock moves in concert with the motion of the vessel, the sleeper is not at a risk of being thrown onto the floor.

Some people worry that it is easy to fall out of a hammock during sleep, but this is rarely the case. The sides of traditional hammocks wrap around the sleeper like a cocoon and make an inadvertent fall, or for a beginner, even a deliberate escape, virtually impossible.

During the Apollo program, the Lunar Module was equipped with hammocks for the commander and lunar module pilot to sleep in between moonwalks.

Retrieved from "http://en.scoutwiki.org/index.php?title=Hammock&oldid=30647"
Categories:
Cookies help us deliver our services. By using our services, you agree to our use of cookies.