The Grand Canyon Council is a local council (#010) of the Boy Scouts of America located in the states of Arizona and New Mexico. 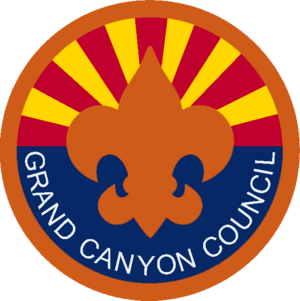 In 2017, Grand Canyon Council underwent a realignment, reducing the number of districts to six each "traditional Scouting" or (Community Districts) and LDS Scouting districts. In 2019, the council plans to absorb Catalina Council in Tucson as the LDS will be creating their own youth movement.[1]

The council is served by the Order of the Arrow - Wipala Wiki Lodge. Our lodge was formed in 1950 and is going strong 69 years later. Our lodge makes up one-fourth of Section W-6W, and is apart of the Western Region.

Grand Canyon Council (GCC) (local council #010) of the Boy Scouts of America operates this scouting district. It serves a large section of Arizona, with headquarters in Phoenix, Arizona. As of 2017 they serve over 15,000 youth members.

Retrieved from "http://en.scoutwiki.org/index.php?title=Grand_Canyon_Council&oldid=45501"
Categories:
Cookies help us deliver our services. By using our services, you agree to our use of cookies.