Scouting and Guiding in Germany

From ScoutWiki, For Everyone, Everywhere involved with Scouting and Guiding...
(Redirected from Germany)
Jump to navigation Jump to search 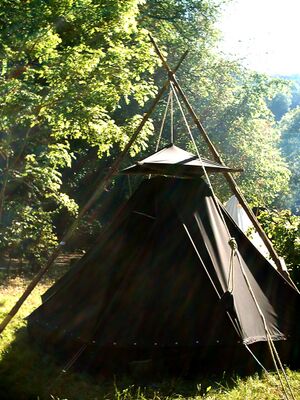 The Kohte, the typical black tent of German Scouting

The Scout movement in Germany consists of about 150 different associations and federations with about 260,000 Scouts and Guides.

Scouting in Germany started in 1909. German Scouting later became involved with the German Youth Movement, of which the Wandervogel was a part. German Scouting flourished until 1934-35, when nearly all associations were closed and their members had to join the Hitler Youth. In West Germany and West Berlin, Scouting was reestablished after 1945, but it was banned in East Germany until 1990 in favor of the Thälmann Pioneers and the Free German Youth. Today it is present in all parts of the unified Federal Republic of Germany.

Among the foreign associations in Germany are

There are also other foreign Scout associations active in Germany, mostly with single troops (e.g. Organization of Russian Young Pathfinders and Plast).

Retrieved from "http://en.scoutwiki.org/index.php?title=Scouting_and_Guiding_in_Germany&oldid=49690"
Categories:
Cookies help us deliver our services. By using our services, you agree to our use of cookies.