Gerakan Pramuka is the national Scouting organization of Indonesia. Scouting was founded in the Dutch East Indies in 1912, and Indonesia became a member of the World Organization of the Scout Movement (WOSM) in 1953. It has 8,054,968 members (as of 2004), making it the world's largest Scout association.

When Indonesia became an independent country, there were more than 60 separate Boy Scout and Girl Guide organizations. Most were directly affiliated with some certain political parties or social groups. Attempts were made to unify all Scout organizations into one.

The thousands of islands made administration and supervision difficult, and the Japanese occupation caused some twenty separate Scout organizations to spring up, and it took time for them to coalesce. In September 1951 thirteen of the stronger Scout organizations met and decided to found a federating body to satisfy national and international needs. Ikatan Pandu Indonesia - Ipindo for short - came into being. Tuan Soemardjo was elected chief commissioner, and Doctor Bahder Djohan, an old Scout and Minister of Education, became honorary President. Government approval of Ipindo was granted on February 22, 1952, and president Sukarno consented to become Patron of the unifying and correlating National Scout Council. Indonesia has been a member of WOSM since 1953.

Gerakan Pramuka is a former member of the World Association of Girl Guides and Girl Scouts, having left WAGGGS and joined WOSM also for the girls in 2002.

After Sri Sultan Hamengkubuwono IX, other Indonesian recipients of the Bronze Wolf, the only distinction of the World Organization of the Scout Movement, awarded by the World Scout Committee for exceptional services to world Scouting, include Abdul Azis Saleh in 1978, John Beng Kiat Liem in 1982 and Retired Lieutenant General Mashudi in 1985.

The Indonesia Scout Movement incorporates both boys and girls. It is an educational movement through Scouting activities, the education being directed toward a new, just, peaceful and prosperous Indonesian community based on the national ideology. Activities of the boys and girls are conducted separately from one another. They have joint activities whenever possible and necessary. Management of the Scout Movement is carried out by the National Headquarters.

To achieve the goals of Scouting, activities are carried out on the group and national level. Routine activities are focused on the development of character, patriotism, physical fitness, skill and intelligence of the Scouts themselves which are very important for their future life. Activities of the special troops are organized in order to develop specific personal interest and talent and enable them to serve the community with the knowledge, ability and skill he/she have learned.

The Scouts also participate in the drive to improve health and nutrition in the community, especially children under five years of age. Acting as extension workers, they practice how to raise cattle, fish, breed hens and grow vegetables.

Gerakan Pramuka is divide in two major educational groups: the member section and the adult section. The first is divided in further age-groups with different educational systems, the second provides the leaders and supports the younger members.

Activities are mainly carried out to archive advancement through the General Skill Requirements (TKU) and Tanda Kecakapan Khusus or Merit Badge system. The highest rank in each age group is Pramuka Garuda (Eagle Scout).

In Pramuka, there are special troops for Rover Scout called Satuan Karya (SAKA). There are seven different troops: 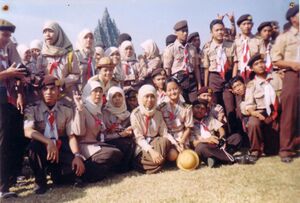 On My Honour , I promise to

Retrieved from "http://en.scoutwiki.org/index.php?title=Gerakan_Pramuka&oldid=30814"
Categories:
Cookies help us deliver our services. By using our services, you agree to our use of cookies.