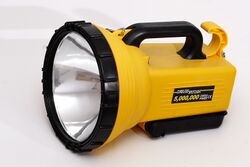 A flashlight, electric torch or simply torch is a hand-held portable electric spotlight. It is known as a flashlight mainly in the United States and Canada and as a torch or electric torch in most Commonwealth countries. 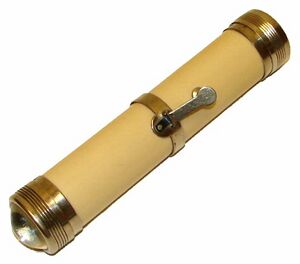 An 1899 Eveready flashlight, one of the earliest flashlight models.

In 1896, Joshua Lionel Cowen invented a decorative lighting fixture for potted plants which consisted of a metal tube housing a light bulb and a dry cell battery. It failed commercially, and so Cowen sold his company and patents to Conrad Hubert that same year and turned his attention to building and selling model trains. Hubert renamed Cowen's company the American Electrical Novelty & Manufacturing Company and, recognizing the true potential of Cowen's invention, hired David Misell to produce a tubular flashlight for portable use. They donated some models to the New York City police, who responded favorably to it.[1] These early flashlights ran on zinc-carbon batteries, which were poor at providing sustained currents; they would run down after a while and needed to rest before being useable again.[2] Since these early flashlights also used energy-inefficient carbon filament bulbs, this happened rather quickly, and consequently they could only be used in brief flashes (hence their name).

A typical flashlight consists of a small incandescent lightbulb with associated parabolic reflector, powered by electric batteries, and with an electric power switch. The components are mounted in a housing that contains the necessary electric circuit and provides ease of handling, a means of access to the batteries for replacement, and a clear covering over the lightbulb for its protection.

Although a relatively simple device, its invention did not occur until the late 19th century because it depended upon the earlier invention of the electric battery and incandescent light bulb. 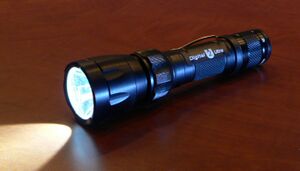 Recently, flashlights which use light-emitting diodes (LEDs) instead of conventional lightbulbs have become available. LEDs have existed for decades, mainly as low-power indicator lights. In 1999, Lumileds Corporation of San Jose, CA, introduced the Luxeon LED, a high-power white-light emitter. For the first time this made possible LED flashlights with power and running time better than some incandescent lights. The first Luxeon LED flashlight was the Arc LS in 2001.

A common misconception about LED-based flashlights is that they generate no heat. While lower-power LED flashlights generate little heat, more powerful LED lights do generate significant amounts of heat – although not as radiant energy – as the semiconductor junction inherently dissipates heat. For this reason higher-powered LED flashlights usually have aluminum bodies and can become quite warm during use. The use of aluminum is largely due to its thermal properties, acting as a heatsink for the high-power LED. Very few high-output LED flashlights use a plastic body due to plastic being a thermal insulator rather than a conductor.

A headlamp is a flashlight worn on the head for hands-free operation. Powerful headlamps mounted on helmets have been used in mining for decades, but general-purpose ones with fabric straps are now also available.

Sometimes a light is mounted to a handgun or rifle.[3][4] See also Streamlight and Surefire.

Most flashlights are cylindrical in design, with the lamp assembly attached to one end. However, early designs came in a variety of shapes. Many resembled lanterns of the day, consisting largely of a box with a handle and the lamp attached to the front. Some others were made to have a similar appearance to candles. It is possible that future developments of battery and LED technology will bring interesting new designs. For instance, one very small light consists of a few LEDs with a switch, designed to be an endcap for a 9-volt battery.

High-quality flashlights go for as much as several hundreds of dollars. Such flashlights are very advanced, using special batteries, have adjustable brightness levels, dive-depth waterproof ratings, interchangeable optics, and are very bright. 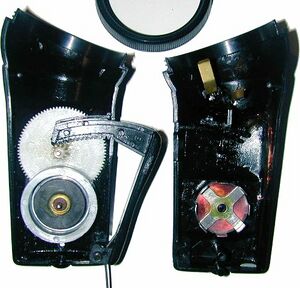 Since batteries can be a burdensome cost in developed countries, let alone in the third world, the development of self-powered flashlights is a welcome advance. Some use solar panels to recharge their batteries during the day.

Some flashlights have an electrical generator built into them. Dynamo-powered flashlights have a winding crank connected to a stepper motor that feeds several diode bridges with their outputs connected in parallel feeding a field effect transistor that charges a capacitor that connects to one or more LEDs. Others generate electricity using electromagnetic induction. They use a strong permanent magnet that can freely slide up and down a tube, passing through a coil of wire as it does. Shaking the flashlight will charge a capacitor or a rechargeable battery that supplies a current to a light source, typically a light-emitting diode or, more rarely, an incandescent light bulb.