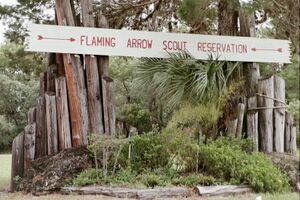 Flaming Arrow Scout Reservation (FASR) is a Boy Scout Camp outside of Lake Wales, Florida. It is owned and operated by Gulf Ridge Council.

When a group comes to Flaming Arrow for longer than a day, they can stay overnight at one of the FASR's campsites. During the Summer Camp program, Troops will stay in either semi-permanent or cabin style bunkhouses. The cabins are located on Jenkins side of camp (the West side) in campsites Arapaho, Blackfoot, and Cheyene. These and the rest of the campsite use tents that are either on wood or concrete platforms. On Jenkins side the remaining campsite are Dakota, Fox, Gosuite, and Hopi, the largest campsite. Hopi is currently not being used after three hurricanes and record rainfall caused the campsite to become part of the lakes. The rest of the campsites are on Hampton side (East side). These sights are Baden Powell, Beard, Seton, West, Boyce, Livingston, Tad Stohler, and the Outpost Campsite (previously known as Site 14). The Outpost campsite is the farthest site from the rest of camp. It also has no real bathrooms or showers, though it does have running water. Livingston was closed because of its out dated facilities on top of hurricane damage. Boyce is haunted and is never used. All the campsites in the main part of camp have flushing toilets, hot water showers, running water, and a screened in pavilion. Many campsite pairs share a bath house (example: Cheyene and Dakota). Plans and some of the hardware is currently in place to run electricity to many of the campsites.

For many campers and Scoutmasters the biggest break in the day are the three meals served in the dining hall, Wood Hall. Wood Hall is located near the center of camp over looking Swim Lake from the Northeast corner of the lake. The dining hall seats nearly three hundred occupants and is air conditioned. Meals are a favorite time of the day not just for the food, but for a chance to get out of the Florida heat in the summer.

Jenkins Hall is located South of Wood Hall, at the end of the road leading into camp from the parking lot. Jenkins houses the camp Trading Post, office, and movie theater. The main room of Jenkins has a projector and a surround sound home theater system, which Troops can watch movies on. The room is also used heavily by the Scuba program and other program areas to show videos. Jenkins Hall is also air conditioned and has a secure wireless internet connection.

FASR offers several types of camping and instruction programs throughout the year. The most prominent is the Boy Scout Summer Camp, where Troops spend a week starting on Sunday afternoon and leaving Saturday morning. During this week they attend classes to earn merit badges, rank advancement, and other skills. Troops only stay for one week, but several Summer Camp weeks are offered starting in early June and ending mid-July.

With the success of the Summer Camp program, FASR also offers an annual Winter Camp. It is less than a week long and occurs between Christmas and New Years Eve. As with summer camp, Troops spend the "week" earning advancement.

During the year, Troops can also come to monthly Mini-Camps, where Scouts can earn a merit badge in a weekend.

Flaming Arrow facilities other events. Boy Scout Troops, The Order of the Arrow, and many other groups and organizations other than Scouting use the camp throughout the year to facilitate their own activities and programs.

Flaming Arrow is made up of several Program Areas that take care of most of the activities.

The Aquatics Area is located in three areas around two of the lakes. The Swimming Area is located on the North end of Swim Lake near the Wood hall. It offers Swimming and Lifesaving merit badges, as well as BSA Lifeguard certification.

Ski Lake is located on the Northwest corner of the property. This lake is entirely devoted to Water Skiing merit badge.

Although not run by the Auquatics Area, Flaming Arrow offers PADI scuba certification, which is taught in buildings and practiced in Swim Lake.

Although the central monument of the climbing area is the thirty foot artificial face rock wall and the forty foot illuminated rapelling tower, the Climbing Area offers many sports merit badges along with Climbing merit badge. Some of the other badges offered are Golf, Sports and Athletics, and Personal Fitness (Eagle Required).

In 2004, Hurricane Charley, Hurricane Frances, and Hurricane Jeanne passed over Flaming Arrow causing damage to many areas of the camp. Surprisingly, almost all of the damage was vegetation loss. Staff and volunteers spent months clearing fallen trees from roads, paths, campsites, and program areas. The Aquatics area was hit the hardest, with no protection from the winds coming across the lakes. The Swimming Area main structure was completely destroyed and the Ski Area Boat House was lost. Around camp flooding was a major problem, as well as other structural damage. Saunders Hall, the original office building had several inches of water inside the building for over a month. Access to the shooting ranges also became limited when Staff City Field flooded.

Summer Camp continued as normal in 2005 after months of repair and clean up. However, nothing could be done about the high lake levels and the existence of new lakes; Staff City Field was now being called Staff City Lake. Summer of 2005 brought record levels of rain fall to the central Florida area. The effects at Flaming Arrow were a dramatic increase in lake level, and massive flooding over the rest of camp. In the Shooting Sports Area, roads and ranges were flooded and eventually closed or relocated. As "Staff City Lake" rose, it eventually overflowed into the Outdoor Skills area, flooding and closing the area. It was relocated to the unused campsite Erie. Within weeks of the start of Summer Camp, Saunders Hall became flooded and has not been used since summer 2005 due to flood damage. Throughout the rest of camp, road and trail flooding was a major problem, especially right after a storm. One large section of road in front of the original Outdoor Skills area became permanently flooded as part of Staff City Lake. As the main lakes in camp rose to record levels, low lying areas became flooded. The Aquatics Area was able to deal with this lake level rise until tests showed increased levels of bacteria from the flow of water all over camp were detected, and the Swimming Area was closed for the rest of Summer Camp. The Boating and Ski Areas were also closed temporarily. In Week 5 of summer camp, Hopi was closed after all routes to and from the site became flooded. The main route to Hopi is a causeway between Swim Lake and Fish Lake. Historically this passage has only flooded briefly after major storms. In early June the lake levels rose high enough to not only connect Fish Lake and Swim Lake, but to also connect Swim Lake and Ski Lake. In addition, the now massive "Sw-ish-ski Lake" was also connected to the nearby Saddle Bag Lake, which is located off-property. This flooding persisted to almost winter and destroyed much of the original landscape. To date almost all of the pine trees that existed in the flood waters have died, as well as many other trees and plants.

Camp has since recovered and the flooding has passed, as well as many Cypress trees have been planted to repopulate the area.