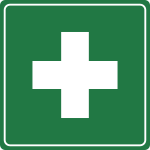 First Aid is the provision of limited care for an illness or injury, which is provided, usually by a lay person, to a sick or injured person until definitive medical treatment can be accessed, or until the illness or injury is dealt with (as not all illnesses or injuries will require a higher level of treatment). It generally consists of series of simple, sometimes life saving, medical techniques, that an individual, either with or without formal medical training, can be trained to perform with minimal equipment.

First aid can also be performed on animals other than humans, although this article refers specifically to human first aid

The Knights Hospitaller were probably the first to specialize in battlefield care for the wounded. Similarly, knights founded the Order of St. John in the 11th century to train other knights specifically how to treat common battlefield injuries.[1] St. John Ambulance was formed in 1877 to teach first aid (a term devised by the order) in large railway centres and mining districts. The order and its training began to spread throughout the British Empire and Europe.[2] As well, in 1859 Henry Dunant helped organize villagers in Switzerland to help victims of the Battle of Solferino. Four years later, four nations met in Geneva and formed the organization which has grown into the Red Cross. Developments in first aid and many other medical techniques have been fueled in large by wars: the American Civil War prompted Clara Barton to organize the American Red Cross.[3] Today, there are several groups that promote first aid, such as the military and the Scouting movement. New techniques and equipment have helped make today's first aid simple and effective.

The 3 main aims of first aid, commonly referred to as the "3 P's" are:

In addition, some trainers may also advocate a 4th 'P' - Protect yourself, although this is not technically an 'aim' of providing first aid, and some people would consider that it is adequately covered by 'Prevent further injury' as this is to the casualty, yourself or others.

Much of first aid is common sense, and people are almost certain to learn some elements as they go through their life (such as knowing to apply a plaster to a small cut on a finger)

However, effective life saving first aid needs hands-on training by experts, especially where it relates to potentially fatal illnesses and injuries, such as those that require Cardiopulmonary resuscitation (CPR), as the procedures may be invasive, and carry a risk of further injury to the patient - which the '3 aims' of first aid above, clearly try to avoid.

As with any training, it is more useful if it occurs before an actual emergency, although in many countries, emergency ambulance dispatchers will give basic first aid instructions over the phone whilst the ambulance is on its way.

To be adequately trained, a person must attend a course (hopefully leading to a qualification recognised in their country), but then, due to regular changes in procedures and protocols, based on updated clinical knowledge, must attend regular refresher courses or recertifications in order to ensure they are doing the best for their patient (and in some countries, to minimise the chance of being held liable for further injury or deterioration)

There are certain skills which can be regarded as core, regardless of where or how first aid is taught. These should always be treated in the order of priority, usually given by the "3 B's"

This means that any first aider should first seek to treat any problems with Breathing, before attempting to deal with a bleed or broken bone (which is not to say that they should not be considered at the time - such as in the case of a spinal injury, where a variation on the technique can be used to open the airway)

As the key skill to first aid is preserving life, the single most important training a first aider can receive is in the primary diagnosis and care of an unconscious or unresponsive patient. The most common mnemonic used to remember the procedure for this is ABC, which stands for Airway, Breathing and Circulation

In order to preserve life, all persons require to have an open airway - a clear passage where air can move in through the mouth or nose through the pharynx and down in to the lungs, without obstruction. Conscious people will maintain their own airway automatically, but those who are unconscious (with a GCS of 3) may be unable to maintain a patent airway, as the part of the brain which normally autonomously controls this, may not be functioning.

If an unconscious patient is lying on their back, their tongue may fall back, obstructing the oro-pharynx (sometimes incorrectly called 'swallowing the tongue'. This can be easily rectified by a first aider tipping the head backwards, which mechanically lifts the tongue clear.

If the patient was breathing, a first aider would normally then place them in the recovery position, with the patient leant over on their side, which also has the effect of clearing the tongue from the pharynx. It also avoids a common cause of death in unconscious patients, which is choking on regurgitated stomach contents.

The airway can also become blocked through a foreign object becoming lodged in the pharynx or larynx, commonly called choking. The first aider will be taught to deal with this through a combination of 'back slaps' and 'abdominal thrusts'

The first aider is also likely to be trained in dealing with injuries such as cuts, grazes or broken bones. They may be able to deal with the situation in its entirety (a small plaster on a paper cut), or may be required to maintain the condition of something like a broken bone, until the next stage of definitive care (usually an ambulance) arrives

Although commonly associated with first aid, the symbol of a red cross is an official symbol of the Red Cross. According to the Geneva Conventions and other international law, the use of this symbol is reserved for official agencies of the International Red Cross and Red Crescent, and as a protective emblem for medical personnel and facilities in combat situations. Use by any other person or organisation is illegal, and may lead to prosecution

The internationally accepted symbol for first aid is the White Cross on a Green background shown at the start of the page.

Some first aiders or first aid organisations may also use the Star of Life device, although this is more often associated with professional Ambulance crews.

First Aid training around the world

In the United Kingdom, there are two main types of first aid courses offered. An "Emergency Aid for Appointed Persons" course typically lasts one day, and covers the basics, focusing on critical interventions for conditions such as cardiac arrest and severe bleeding, and is usually not formally assessed. A "First Aid at Work" course is a four-day course (two days for a requalification) that covers the full spectrum of first aid, and is formally assessed. Certificates for the "First Aid at Work" course are issued by the training organisation and are valid for a period of three years from the date the delegate passes the course. Other courses offered by training organisations such as St John Ambulance, St. Andrew's Ambulance Association or the British Red Cross include Baby & Child Courses, manual handling, people moving, and courses geared towards more advanced life support, such as defibrillation and administration of medical gases such as oxygen & entonox).

In Australia, First Aid Training can be offered by any organisation accredited by the State Governments. Levels of training available include:

In Ireland the workplace qualification is the Occupational First Aid Certificate which is validated by the National Ambulance Training School. They hold the register of all Instructors/Examiners. The certificate is awarded after a three day course and is valid for three years from date of issue. Organisations offering the certificate include; the Irish Red Cross, Order of Malta, LTS First Aid Specialists, and the St John Ambulance.

There are several types of first aid (and first aider) which require specific additional training. These are usually undertaken to fulfill the demands of the work or activity undertaken.

Retrieved from "http://en.scoutwiki.org/index.php?title=First_aid&oldid=38919"
Categories:
Cookies help us deliver our services. By using our services, you agree to our use of cookies.