This term should not be confused with Exploring, which was a program of the Boy Scouts of America.

Explorer Scouts (shortened to Explorers), a section of the Scout Association in the United Kingdom for 14 to 18 year olds, was introduced in 2001 replacing Venture Scouts (which was for 15.5 to 20 year olds). This was part of a greater change in programme, including the introduction of Scout Network for 18 to 25 year olds. The aim of the section is to provide a flexible and active Scouting programme for adolescents, with an emphasis on personal challenge and adventure.

The Explorer Scout section follows on from the Scout section, and is in turn followed by Scout Network. Explorer Scouts meet as Units, and are organised and run at the District level. However, Explorer Scouts are expected to participate in "linking" activities with local Scout Groups. The section also runs a Young Leader programme which provides support for the junior sections.

Explorer Scouts are able to attain the Queen's Scout Award, which is the highest Scouting Award in the United Kingdom. There are also a number of activity and skill badges which can be awarded to the young people upon meeting requirements in a variety of disciplines from horse-riding to first aid.

Districts are able to have as many Explorer Scout Units as they see fit. Explorer Scout membership is flexible within districts, allowing members of one unit to participate in the programme of any other within the district. In some instances, this flexibility extends to neighbouring Districts.

While the majority of units meet regularly to provide the core Scouting programme, districts can create specialised units. The programme and purpose of these additional units vary to meet specific requirements. For example, a climbing acivity unit can be created which provides climbing activity leaders and arranges for visits to indoor and outdoor climbing venues. Another specialised unit is the Young Leaders Unit. The implementation of the Young Leaders Unit varies from district to district, with some acting like a normal unit which also provides the Young Leader training, while others meet less frequently.

A number of units continue the Sea and Air Scouting programmes. Members of these units are known as Sea or Air Explorers.

Ideally, each unit will have an Explorer Scout Leader (ESL), and a number of Assistants and/or Helpers.[3] Membership varies greatly, but the average is between 10 and 20 members in the main units. Specialised units have much more variation in membership due to the nature of their programmes.

The Young Leaders' Programme is run alongside the main Explorer Scout Programme. It is a formalisation of what was happening in many Groups and Districts across the country where older Scouts were returning to help the younger sections. Since its launch is 2001 it has been seen as the unexpected success of Explorer Scouting.

Young Leaders support the younger sections of Beavers, Cubs and Scouts; although they are not a replacement for adult leaders. They are given appropriate training for their positions, and are expected to be involved in the planning of activities and evenings.

Young Leaders have a training programme similar to that of adult leaders. They have eleven modules to complete, they are able to wear the Young Leaders Badge once they have completed module A. This module must be completed within three months of becoming a Young Leader and is the only compulsory module.

These modules also count towards part of their Wood Badge if they choose to become an adult in scouting at the age of 18. There are currently around half a dozen instances which the adult training scheme accredits parts of the Young Leaders' Scheme, though local arrangements are encouraged to be used to validate prior learning and knowledge of a Young Leader.

There are also four missions for Young Leaders to complete, which involve running games and activities for their relevant section. Upon complete each mission, an additional rectangular-shaped badge can be added around the standard Young Leader badge. Upon completing all modules, Young Leaders are entitled to wear a Young Leader belt buckle to recognise this achievement.

The Membership Award is only actually received by young people new to Scouting, whereas those Explorer Scouts who have joined from a Scout Troop will undertake the Moving-On Award.[4]

However, the Awards cover the same basic principles, and Units may have all new Explorers participate in the Membership Award, regardless of how they came to join the Unit.

Explorer Scouts continue the Scouting programme of Progressive Awards. The requirements of each stage become more challenging, reflecting the age and abilities of the young people undertaking the Awards.

The three stages of the Awards open to Explorer Scouts are (in ascending order):

Each level requires that Explorers demonstrate community, faith, self-motivation, personal discipline, and many other qualities.

The Duke of Edinburgh's Award works alongside the Scout Awards, and completion of certain sections of either Award can contribute to the other.

The Explorer Belt is a long-standing award for Scouts which has now been adapted for the new programme.[8]

It is open to all members of Scouting between the ages of 16-25, and is aimed at promoting self-reliance, teamwork, and adventurous spirit.

The Explorer Belt requires participants to undertake a 10 day expedition in a foreign country, devoting some time to travelling around and exploring. Participants also have to undertake a major project of their own choosing, along with a number of smaller projects or challenges - some of which are not revealed to them until the start of the expedition.

Explorer Scouts are eligible for participation in the World Scout Jamboree - the largest gathering of Scouts from around the world, and the largest scout gathering in the UK since 1957.

Sun Run is a massive event for Explorer Scouts in the United Kingdom held every year in July.[9] Over a thousand Explorers camp in a field in Gloucestershire. The weekend starts with a party on the Friday night, usually including a Disc jockey and some cover bands. The main event, a 26.2 mile night hike (a full marathon) through the surrounding hillsides, starts with participants watching the sun set. The aim is to complete the route, arriving in time to watch the sunrise. There is also an half marathon race(13.1 mile) hike called the Moon Run.

The event takes place at the home of UK Scouting, Gilwell Park campsite. It comprises a set of activities and challenges over a 24 hour period. In 2006, over 1500 Explorer Scouts and Senior Section Guides took part in Gilwell 24. Gilwell 24 2008 will take place on 12th of July. One of the activities is the Gilwell Gauntlet, a series of challenges that takes place from 3AM, as teams from different explorer groups compete to win points by completing activities, such as Identifying song titles, logic puzzles and physical tasks.

To mark the centenary of Scouting, Scottish Scouting is running a set of 12 massive camps open to all members of the Explorer Section in the UK. These range from activity camps to Young Leaders courses and are sure to be very popular

There is an air rifle competition at Bisley, Surrey every October.

This event is growing in popularity, with many categories for Scouts aged 12 and up.

High scoring competitors are invited to join the National Scout Rifle Squad, which has supplied members of the British Olympic Games, Commonwealth Games, and World Championship teams in the past.[10] 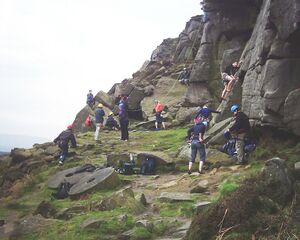 The Explorer Scout Programme includes many other activities - too many to fully list. The most common activities are:

Many Explorer Scouts can become quite proficient in their chosen activities, and many attain instructor's qualifications as recognised by the activity's national governing body (for example, British Canoe Union coaches for kayaking).

Retrieved from "http://en.scoutwiki.org/index.php?title=Explorer_Scouts&oldid=37798"
Categories:
Cookies help us deliver our services. By using our services, you agree to our use of cookies.