From ScoutWiki, For Everyone, Everywhere involved with Scouting and Guiding...
Jump to navigation Jump to search
File:Europe Region (World Association of Girl Guides and Girl Scouts).png
Badge of the WAGGGS-Europe Region

The WAGGGS Europe Region is the regional office of the World Association of Girl Guides and Girl Scouts, which supports Girl Guiding and Girl Scouting in Europe, including the former Soviet Republics of Armenia, Azerbaijan, Belarus, Georgia, Moldova, Russia, and Ukraine, but inclusive of Cyprus, though technically not part of Europe for cultural reasons, and Israel for political ones.

All the formerly communist states of Central and Eastern Europe and the Soviet Union have developed or are developing Guiding in the wake of the renaissance in the region. These include Albania, Bulgaria, East Germany, Hungary, Poland, Romania, and the successor states to Czechoslovakia, Yugoslavia and the Baltic nations independent of the former Soviet Union. Of these, Poland, the Czech Republic and Hungary have been most successful in regrowing their Guide movements and are very well-developed, thanks in part to the existence of Guides-in-Exile movements for the diaspora of each nation.

This region is the counterpart of the European Region of the World Organization of the Scout Movement (WOSM). The Europe Region WAGGGS has strong connections to the European Region of WOSM. Both maintained a joined office in Brussels for some years and published a monthly newsletter called Eurofax. Currently the two regions publish 'europak' monthly at http;//www.europak-online.net. 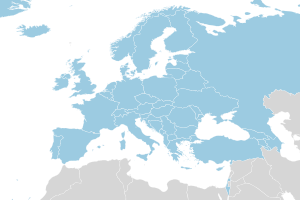 Retrieved from "http://en.scoutwiki.org/index.php?title=Europe_Region_(World_Association_of_Girl_Guides_and_Girl_Scouts)&oldid=27858"
Categories:
Cookies help us deliver our services. By using our services, you agree to our use of cookies.