Duty to God - Living the Scout Promise - This term has multiple usages in the Scouting Movement:

This article discusses how a scout can do his duty to God as the requirement to live the principles of the Scout Oath or Promise.

"The World Movement of Scouting is in a very unique position to help the different peoples and cultures of the world find common ground from among their best traditions and beliefs. By this Scouting can help promote better world citizenship and world peace." [1]

A scout is expected to at all times, and in all places to show Scout spirit by living the principles of the Scout Promise and Scout Law. Many of these principles are closely connected with doing your Duty to God.

It should be clear to everyone that this is not a requirement that every scout lives the Law of God with exactness to your own religious beliefs. Instead this should be encouragement for every one to seriously study, pray and ponder about the meaning of life and what does religious mean to you and how can appropriate religious practices make you a better person.

One very important reason for these things is to help every young person learn the difference between right and wrong and why that should be an important part of your moral compass for the future. Remember also that just because everyone around you engage in activities that you know are wrong still does not make it right because you understand things from a greater, deeper perspective.

An an example, Requirement #2, for to become an Eagle Scout, makes very specific reference to doing your Duty to God:

During the Board of Review, a young scout will be asked questions about how he fulfilled this requirement. Depending upon his/her faith and beliefs, the scout's answers may vary greatly. A member of the Board should include at least one or more members that share the same faith background as the scout.

Questions may include the following:

Great collection of videos to teach youth about Duty to God: 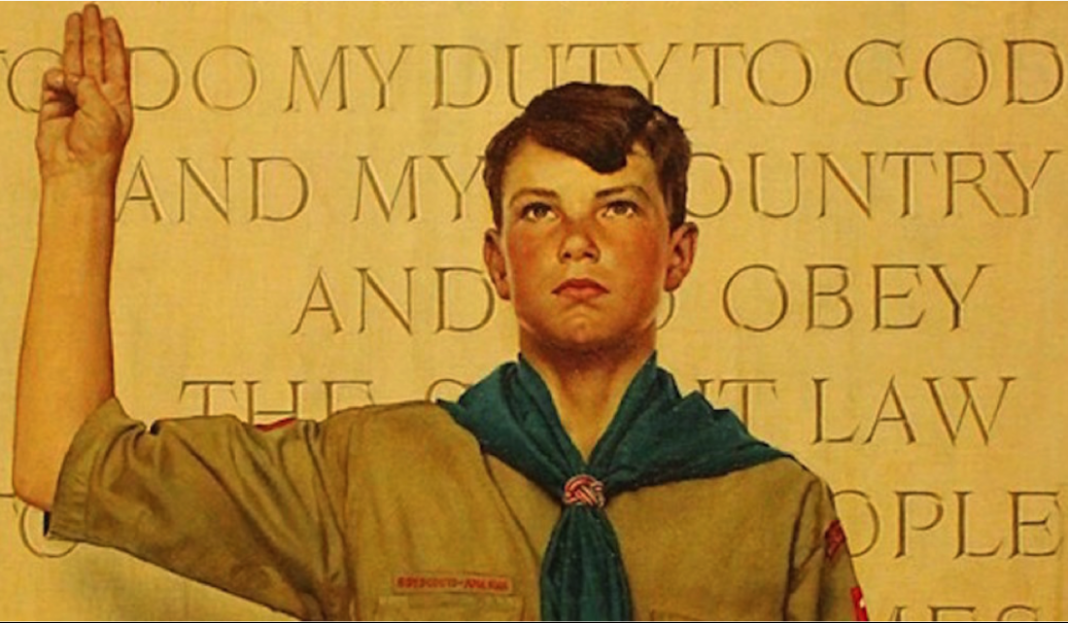 Every scout is required to follow the Scout Promise (AKA: Th Scout Oath) which outlines four key principles or duties -

Duty to God is a specially defined requirement of the Constitution of the World Organization of the Scout Movement (WOSM). [2] In order to accommodate many different religions within Scouting, "God" may refer to a higher power, and is not specifically restricted to the God of the monotheistic religions. The WOSM Constitution explains "Duty to God" as "Adherence to spiritual principles, loyalty to the religion that expresses them and acceptance of the duties resulting therefrom."

The World Association of Girl Guides and Girl Scouts (WAGGGS), which is a sister organization to WOSM, has the very same wording in their constitution (Part I, Article 2: Original Promise),[3] and follows similar policies.

The Boy Scouts of America maintains that no member can grow into the best kind of citizen without recognizing an obligation to God and, therefore, recognizes the religious element in the training of the member, but it is absolutely nonsectarian in its attitude toward that religious training. Its policy is that the home and organization or group with which the member is connected shall give definite attention to religious life.

Only persons willing to subscribe to these precepts from the Declaration of Religious Principle and to the Bylaws of the Boy Scouts of America shall be entitled to certificates of leadership.[4] (Accredited to James E. West, 1st Chief Scout Executive of BSA)

Underscoring just how important it is, the BSA National Executive Board met at their 2018 National Annual Meeting in Dallas and adopted a resolution that reaffirms the organization’s Duty to God:

WHEREAS the foundational values of the Boy Scouts of America are reflected in the Scout Oath and Scout Law;

WHEREAS the first part of the Scout Oath declares “On my honor I will do my best to do my Duty to God and my country and to obey the Scout Law;”

WHEREAS the Declaration of Religious Principle in Bylaws of the Boy Scouts of America states that:

The recognition of God as the ruling and leading power in the universe and the grateful acknowledgement of His favors and blessings are necessary to the best type of citizenship and are wholesome precepts in the education of the growing members. No matter what the religious faith of the members may be, this fundamental of good citizenship should be kept before them.

WHEREAS the twelfth point of the Scout Law is Reverent and while the Boy Scouts of America is absolutely nonsectarian in its view of religious training, Reverent means that a Scout is faithful in his or her religious duties and respects the beliefs of others; and

WHEREAS these faith-based tenets have been a part of the Boy Scouts of America since it was founded and, notwithstanding any changes to Scouting programs, the commitment of the movement to Duty to God is unwavering;

While there are thousands upon thousands of religious movements in the world today, but Scouting's Duty to God promises attempts to accommodate all of them as best as possible. Many of these will define Duty to God in great detail and with some bit of variation. Many scouting families identify with particular movement. Many others may not identify with any form of organized religious movement, but follow their own traditions in the home. However, many religious traditions follow a few key core beliefs that are important to note:

It is noted here that some religious movements may have additional important core beliefs all of which you should discover during your practice of Scripture Study which will help you to learn about those.

1. Faith in a Supreme Being

The definition of faith made very dramatically for each person. But you may find some of the following elements necessary: 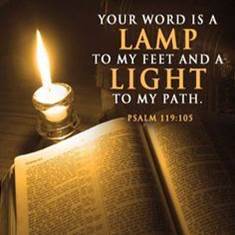 A key part of fulfilling your Duty to God is to first learn it. Many religious faiths of a collection of both history and wisdom that are referred to as scripture. Taking a few minutes each day to study the holy books for your faith is an essential duty. An added bonus is the discovery of life-enhancing wisdom.

Search the scriptures; for in them ye think ye have eternal life: and they are they which testify of me. [7]

Here are a few sample links of holy scripture that you can access free online:

Our Father which art in heaven, Hallowed be thy name. Thy kingdom come. Thy will be done in earth, as it is in heaven. Give us this day our daily bread. And forgive us our debts, as we forgive our debtors. And lead us not into temptation, but deliver us from evil: For thine is the kingdom, and the power, and the glory, for ever. Amen. (The Lord's Prayer: St Matthew 6:5-13)

"We are all children of God. He loves us and knows our needs, and He wants us to communicate with Him through prayer. We should pray to Him and no one else. The Lord Jesus Christ commanded, “Ye must always pray unto the Father in my name”. As we make a habit of approaching God in prayer, we will come to know Him and draw ever nearer to Him. Our desires will become more like His. We will be able to secure for ourselves and for others blessings that He is ready to give if we will but ask in faith." [9]

Several of the major religious hold aside one day of the week for worship, introspection to repents of one's mistakes and to renew one's covenant to follow a path of good works.

Observing a weekly Sabbath is #4 of the Ten Commandments given to Moses in the ancient Old Testament:

Additionally, there are many religious commandments and faith-based traditions for celebrating special holiday observances during the month and year. Which ones are unique to your religion?

7. Invite Others to Faith

The resurrected Savior in his final instruction to his disciples before his departure, repeated a simple commandment three times : "Feed My Sheep". (St John 21:15-17) 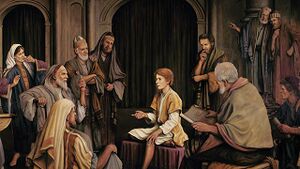 There are many significant Duty to God examples from history:

And when he was twelve years ​old, they went up to Jerusalem after the custom of the feast...And when they (his parents) found him not, they turned back again to Jerusalem, seeking him. And it came to pass, that after three days they found him in the temple, sitting in the midst of the doctors, both hearing them, and asking them questions. And all that heard him were astonished at his understanding and answers. And when they saw him, they were amazed: and his mother said unto him, Son, why hast thou thus dealt with us? behold, thy father and I have sought thee sorrowing. And he said unto them, How is it that ye sought me? wist ye not that I must be about my (Heavenly) Father’s business?...And Jesus increased in wisdom and stature, and in favour with God and man. St Luke 2:42-52

Do you Have to Believe in God?

Fulfilling your Duty to God is actually a private, personal spiritual quest for each individual. Scouting is "absolutely non-sectarian" and therefore does NOT have a set Religious standards test. In fact, the opposite applies, where everyone has the free agency to define and pursue any religion they belief appropriate and are willing to allow all others the same liberty.

Now it could certainly be possible, that a person is unable to find a belief that is agreeable to their conscience. Some people spend their lifetime wrestling with their beliefs. Many others may conclude that God does not exist.

Look again at the wording of Requirement #2 (BSA) for Eagle rank: "Tell how you have done your duty to God...". The test is not if the scout became a devout member of a particular faith system or completed some mighty miracle.

But rather is he able to explain the following:

Consider the following general definitions that may fit who will exploring his Duty to God, may have decided that his/her path is not to join any set organized religion:

Teaching Scouts about Duty to God

Scouting teaches youth to do their Duty to God through 1) Program Delivery, 2) Special Observances, 3) Faith-based Partnerships and 4) BSA Religious Support.

Benefits of Practicing Duty to God

1) "I have been asked to describe more fully what was in my mind as regards religion when I instituted Scouting and Guiding. I was asked: 'Where does religion come in?' Well, my reply is: 'It does not come in at all. It is already there. It is the fundamental factor underlying Scouting and Guiding.' " ( Lord Robert Baden-Powell, founder of Scouting) 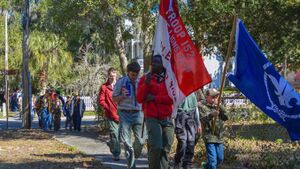 Retrieved from "http://en.scoutwiki.org/index.php?title=Duty_to_God_(Scout_Oath)&oldid=49463"
Categories:
Cookies help us deliver our services. By using our services, you agree to our use of cookies.