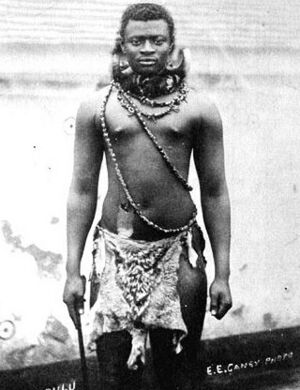 He succeeded his father Cetshwayo, who was the last king of the Zulus to be officially recognized as such by the British. Zululand had been broken up into 13 smaller territories after the Anglo-Zulu War, and Cetshwayo, and subsequently Dinuzulu, administered one of them. This was found to be unworkable, and the British restored Cetshwayo as paramount chief. However, they left one of Cetshwayo's sons, Usibepu, alone with his lands intact. On July 22, 1883 he attacked Cetshwayo's new kraal in Ulundi, wounding the king and causing him to flee.

To contest the succession Dinuzulu first appealed to the British, but had no response. He then offered rewards of land to Boer mercenaries who would come and fight on his side. In 1884 a group of Boer farmers from the districts of Utrecht and Vryheid undertook to restore order, in return for land for the formation of an independent republic. Led by General Louis Botha, they formed Dinuzulu's Volunteers and after several clashes with Usibepu, defeated him at the Battle of Ghost Mountain (also known as the Battle of Tshaneni) on June 5, 1884, killing Usibepu and his forces to the last man.

The mercenaries then claimed payment and Dinuzulu found himself confronted with demands he could not meet. 800 mercenaries claimed to have fought for him and all claimed large farms. They claimed about half of Zululand, including St Lucia Bay, an outlet to the sea. Britain intervened and the mercenaries were given a grant of land in the northern part of Zululand. 500 mercenaries each received a farm of 16 km². Another 300 men who had arrived late received smaller grants, known as 'half farms'. On the 5 August 1884, these mercenaries declared a republic, with the town of Vryheid as its capital, which lasted for only four years. After considerable dispute a Natal arbitration court recognised the New Republic, reduced in size, however, and deprived of its claims to St Lucia. The following year it was absorbed into the Transvaal. Thus Dinuzulu won the battle but lost a huge tract of land as a consequence.

In 1890 Dinuzulu was exiled to the island of St. Helena for seven years for leading a Zulu army against the British from 1883 to 1884.

In 1906 the so-called Bhambhata rebellion broke out. After the rebellion had been put down, Dinuzulu was accused of giving orders to Bhambhata to start the rebellion and was put on trial for treason.

Although he steadfastly protested his innocence, he was found guilty and sentenced to four years imprisonment in March, 1908. Two years later an old friend of his, General Louis Botha, became Prime Minister of the Union of South Africa. Botha ordered that Dinuzulu be released and transported to the farm Uitkyk in the Transvaal, where he died in 1913.

He was succeeded by his son Solomon kaDinuzulu.

A statue of Dinuzulu will be erected next to the statue of General Louis Botha, the first prime minister of the Union of South Africa, at the corner of Berea Road and Warwick Avenue in Durban.

Retrieved from "http://en.scoutwiki.org/index.php?title=Dinuzulu&oldid=38057"
Categories:
Cookies help us deliver our services. By using our services, you agree to our use of cookies.