From ScoutWiki, For Everyone, Everywhere involved with Scouting and Guiding...
(Redirected from Cub Scouts)
Jump to navigation Jump to search 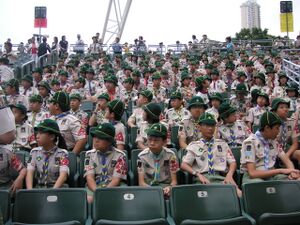 A Cub Scout is a member of the section of the worldwide Scouting movement for young persons normally aged 6–10. In some countries they are called Wolf Cubs and are often referred to simply as Cubs. The movement is often referred to simply as Cubbing. Originally, like the Boy Scouts, the Cubbing was for boys only; girls were expected to join the Brownies and then the Girl Guides or Girl Scouts. Since about 1990 the Cubs has been open to both girls and boys in most countries.

The Cub Scouting movement was founded by Robert Baden-Powell in 1916, ten years after the foundation of the Scouts, in order to cater to the many younger boys who had not yet reached the age limit for the Boy Scouts but who wanted to take part in Scouting. During these first ten years many troops had either allowed younger boys to join or had set up unofficial Junior or Cadet Scout Troops. These Cadet Troops taught a much simpler form of Scouting, including just the basic knotting techniques, basic first aid and tracking. In 1914, there were articles in the Headquarters’ Gazette (a then regular newsletter to leaders) outlining an official scheme, however this was not what Baden-Powell wanted. Rather he sought something quite different — a movement in its own right, with its own identity and program.

In 1914 Baden Powell announced a Junior Section for Scouting. In 1916, he published his own outlines for such a scheme, it was to be called Wolf Cubbing. It has been speculated that Baden-Powell may have had a number of reasons to call this section Wolf Cubs. The African Matabele people had given B-P the nickname Impeesa, meaning The Wolf that never sleeps; Wolf was the name of the cannon made in the railway workshops at Mafeking; Wolf was one of the names Native Americans gave to their best scouts. So a young boy not old enough to be a wolf or true Scout could be a baby wolf or Wolf Cub.

Baden-Powell asked his friend Rudyard Kipling for the use of his The Jungle Book history and universe as a motivational frame in cub scouting. Baden-Powell wrote a new book The Wolf Cub's Handbook for junior members. In 1917, junior members became known as Wolf Cubs.

In the 1960s, the Wolf Cub section departed from the jungle theme and the section changed their name to Cub Scout. Although they were now detached from jungle theme, the Jungle Stories and Cub ceremony were retained as tradition -- such as the Grand Howl which signals the start and end of the Cub Scout Meetings; and the use of Jungle Books names (as described below).

Originally, Cub Scout membership was open only to boys while the Brownies were set up as a parallel section for young girls. This remains the situation in some places. Most member organizations of World Organization of the Scout Movement (WOSM) admitted girls to the Cub Scouts while others have separate groups, called Packs, for boys and girls.

Cub Scouts are organized in Packs, which are usually linked to a Scout group (district), providing a community with all age sections. Adult leaders of Cub packs take the names of The Jungle Book 's main characters. The Cubs are taught that the leader is called Akela. Akela is the Den leader at Den meetings; The Cubmaster at Pack meetings; the Teacher at school, or the parent at home. Cub Scouts have a distinctive two-finger salute according to the Jungle theme, in contrast to the three-finger salute of Boy Scouts. However, in the Scout Association of United Kingdom (UK) and some of its overseas branches, the two-finger salute was later replaced by the three-finger salute when they detached from the Jungle theme. Historically, Cub Scouts wear a distinctive headdress, which is a tight-fitting green felt cap with green felt visor, yellow pipings, and a yellow fleur-de-lis emblem at the front — although in some countries this has been replaced by more contemporary headgears.

Like Scout Troops, Cub Scouts are assigned to small teams within the Pack. Baden-Powell named the team Six, which refers to the six members in each team. In the United States (U.S.), these teams are each called a Den, and each Den has all boys in the same school grade. Youth Leaders from more senior Sections of Scouting are actively encouraged to assist as Cub Scout Leaders. In the UK and in Australia these persons were originally called Cub Instructors. Within Scouts Australia the term Youth Helper is now formally applied to such persons, whilst in the United Kingdom they are called Young Leaders. In Canada, a Scout who assists in the Cub program is designated as a Kim. In the United States, the term Den Chief is used.

In many European countries (especially where the Jungle theme still has a strong part in the programme), Saint Francis of Assisi is the patron saint of Cub Scouts, because of his relationship with wolves.

Each Pack has a number of annual events such as the Pinewood derby, the Space Derby, and the Boy Scout birthday celebration. The dates of each are generally only consistent state-wide. The emphasis of Cub Scouting is to have fun and learn at the same time.

Cub Scouts, like the Boy Scouts, uses a ranking system. But unlike its older counterpart, the ranks are often dependent upon age or grade level. The particular form that the training takes varies in different countries

Cubs in member organizations of WOSM

In Pfadfinder und Pfadfinderinnen Österreichs Cub Scouting is the section for children in the age of 7 to 10. The jungle theme is the symbolic framework. The first pack was started in autumn of 1920 in Vienna. At the beginning there were different symbolic frameworks: red Indians (taken from “Kibbo Kift” written by John Hargrave) and Robinson Crusoe. In the thirties the Jungle theme was introduced.

In Scouts Canada, the Wolf Cubs program is very similar to that of the UK. Sixes wear a colored patch, rather than a distinctive woggle. The Cub motto is "Do Your Best".

The tradition of Cub Scouting in Hong Kong was inherited from the British. It is the largest section of the Scout Movement in Hong Kong.

The division within a Pack is called Six (小隊). Each Six is with a Sixer (隊長) and a Seconder (隊副 or 副隊長). Each Six is distinguished by a color and named after it. Each member of the Six wear a woggle with color of their Six.

The Promise and Law are simplified from Scout's ones for the Cub Scouts.

Traditionally, the logo of Wolf Cub denotes the Cub Scouts, but it is rarely used.

In Ireland, the section is known as Macaoimh.

In Singapore, the junior section of the Scouting movement was known as the Cadet Scouts, until 2005 when it was renamed the Cub Scouts in line with international practice.

In the UK Sixes are lead by a 'Sixer' and have a 'Second' as a backup. The Sixer wears two stripes on his/her uniform and the Seconder one stripe. When a Cub Scout is made a Sixer, the Second's badge (with one stripe) should be removed and replaced with the Sixer's badge.

The Cub Scouts are a division of the Boy Scouts of America (BSA). It is a family program designed for boys who are in the first grade through fifth grade. Parents, leaders, and organizations work together to achieve the purposes of Cub Scouting. Currently, Cub Scouting is the largest of the BSA's three membership divisions.

Cub Scouting is based on a program of fun, where the Cub gets satisfaction from meeting challenges, having friends, feeling good about himself, and feeling he is important to other people. Cubs learn new things, discover and master new skills, gain self-confidence, and develop strong friendships. Families are a core part of Cub Scouts and are included in many activities.

Cub Scouting has ideals of spiritual and character growth, citizenship training, and personal fitness. Scouting provides the boy with a positive, encouraging peer group, carefully selected leaders who provide good role models and a group setting where values are taught to reinforce positive qualities of character.

Retrieved from "http://en.scoutwiki.org/index.php?title=Cub_Scout&oldid=49397"
Categories:
Cookies help us deliver our services. By using our services, you agree to our use of cookies.