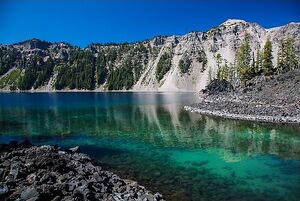 The lake is 1,949 feet (594 m) deep at its deepest point, which makes it the deepest lake in the United States, the second-deepest in North America and the ninth-deepest in the world. The impressive average depth of this volcanic lake is due to the nearly symmetrical 4,000-foot-deep (1,200 m) caldera formed 7,700 years ago during the violent climactic eruptions and subsequent collapse of Mount Mazama and the relatively moist climate that is typical of the crest of the Cascade Range.

Boat ride to the center of the lake and then hike to the summit for a 360' panaromic view of Crater Lake.

The Cleetwood Cove trail originates on the north side of the lake about 4.5 miles east of North Junction along East Rim Drive. The trail is the only one that accesses the shoreline of the lake, descending 656 feet (200 m) from the Cleetwood Cove parking lot. First opened during the summer of 1960, the trail is 1.1 miles long with an 11% grade that rates it as a strenuous route on the return trip. Due to its steep grade, the trail is not accessible for mobility-impaired visitors. A dock with concessionaire boats facilitates tours around the lake with a stop at Wizard Island for dropping off and picking up passengers. Swimming and fishing are permitted. Snow may cover the trail from October to July with some variance depending on yearly snowfall conditions.[1]

The Watchman Peak trail begins from the Watchman Overlook parking lot, about 3.8 miles northwest of Rim Village.[2] The trail is 0.8 miles long with a 420 ft elevation change.[3] It is a steady uphill trail on an isolated mountain on the west rim of the crater, with several switchbacks, providing wide views of Crater Lake and Wizard Island. Several nearby landmarks are visible from the summit, including Mount McLoughlin, Mount Thielsen, Union Peak, Mount Scott and the Klamath Basin. The trail ends next to a historic fire lookout tower built in 1932.[2]

This is considered to be the easiest trail, looping around the Castle Crest Wildflower Garden. It starts from the East Rim Road, near the park's headquarters. It received its name because of a large stretch of meadows around which the trail circles and which is bursting with wildflowers in the springtime. The trail is about 0.5 mile long before it reaches the wildflower meadow garden, from which other improvised routes depart.

The Plaikni Falls trail is the newest trail on the Crater Lake park. It stretches 1.1 miles (1.8 km) from the trailhead located 1.2 miles (1.9 km) south from the Phantom Ship Overlook on Pinnacles Road, which spins off Rim Drive. The trail leads to Plaikni Falls. Most of the trail is wheelchair-accessible. The final stretch is fairly uphill, which may prove moderately challenging.

The Garfield Peak trail is a moderately challenging 1.7 mile hike to Garfield Peak. The trailhead is located east of the Crater Lake Lodge and gains approximately 1,000 feet (300 m) of elevation. Several spots along the trail provide viewpoints overlooking the Phantom Ship island and Dutton Cliff. A few viewpoints offer unique views of Wizard island. The trail is popular in the late afternoon on account of unique shifting colors over the lake and its surroundings.

Retrieved from "http://en.scoutwiki.org/index.php?title=Crater_Lake_National_Park&oldid=45961"
Categories:
Cookies help us deliver our services. By using our services, you agree to our use of cookies.