The Carrick bend is a knot used for joining two lines. It is particularly appropriate for very heavy rope or cable that is too large and stiff to easily be formed into other common bends.[1][2] It will not jam even after carrying a significant load or being soaked with water.[3] The Carrick bend's aesthetically pleasing interwoven and symmetrical shape has also made it popular for decorative purposes.

This knot's name dates back to at least 1783 when it was used by M. Lescallier in Vocabulaire des Termes de Marine.[1] Its origins prior to that are not known with certainty. There are several possible explanations for the name "Carrick" being associated with this bend. The Elizabethan era plasterwork of Ormonde Castle in Carrick-on-Suir shows numerous Carrick bends molded in relief. Or the name may come from Carrick Roads — a large natural anchorage by Falmouth in Cornwall, England. The name may also have been derived from the Carrack, a medieval type of ship.[4]

The eight crossings within the Carrick bend allow for many similar looking knots to be made. The lines in a "full" or "true" Carrick bend alternate between over and under at every crossing. There are also two ways the ends can emerge from the knot: diagonally opposed or from the same side. The form with the ends emerging diagonally opposed is considered more secure.[1]

Unfortunately, with so many permutations, the Carrick bend is prone to being tied incorrectly.[3]

The Carrick bend is generally tied in a flat interwoven form and without additional measures it will capsize (collapse) under load into a stable but bulky form. This capsized form is more convenient to make, but is likely to be more difficult to untie than when seized.

In the interest of making the Carrick bend easier to untie, especially when tied in extremely large rope, the ends may be seized to prevent the knot from collapsing when load is applied. This practice also keeps the knot's profile flatter and can ease its passage over capstans or winches.[5] 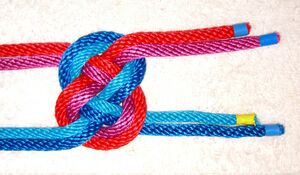 Decorative form made with doubled lines

In the decorative variation, both standing ends enter from one side and both working ends exit from the other. In this configuration the knot is known as the Josephine knot (macrame) or double coin knot (Chinese knotting). This form of the Carrick bend is found depicted in heraldry, sometimes with the tails of heraldic serpents woven (or "nowed") into this knot.[6]

The knot can be tied using doubled lines for an even flatter, more elaborate appearance.

The fully interwoven diagonal Carrick bend is the most secure variation. All other forms are inferior[3] and not recommended as bends.[1] Given the possibility of tying the Carrick bend incorrectly, it is important to carefully check the knot each time it is tied.

Although the Carrick bend has a reputation for strength, some tests have shown it to be as weak as 65% efficiency.[1]