Carl XVI Gustaf (full name: Carl Gustaf Folke Hubertus, born 30 April 1946) is the reigning King of Sweden since 15 September 1973, succeeding his grandfather King Gustaf VI Adolf. He is the only son of the late Prince Gustaf Adolf, Duke of Västerbotten, who died in 1947, and Princess Sibylla of Saxe-Coburg and Gotha.

Unlike many other European monarchs who have extensive styles, King Carl Gustaf's formal and complete style is simply His Majesty Carl XVI Gustaf, King of Sweden. The King's heir apparent, upon passage on 1 January 1980 of a new law establishing absolute primogeniture (the first such law passed in European history), is Crown Princess Victoria, the eldest child of the King and his wife, Queen Silvia.

Prince Carl Gustaf was also given the title of the Duke of Jämtland.

His father, Prince Gustaf Adolf, Duke of Västerbotten, was killed in an airplane crash on 26 January 1947, at the Copenhagen Airport.

Prince Carl Gustaf was the youngest of five children and the only son of Sweden's Prince Gustaf Adolf and Princess Sibylla. His father's death had left the nine-month-old Prince second in line for the throne, behind his grandfather, then Crown Prince Gustaf Adolf. When his great-grandfather King Gustaf V died in 1950, the four-year-old Prince became the heir apparent of Sweden.

In a speech[1] in 2005, the King expressed some of his feelings about growing up without having known his father. His sister, Princess Birgitta, elaborated on these feelings in an interview around the same time, commenting that their mother and the strict Swedish royal court of the time did not consider the emotional needs of Prince Gustaf Adolf's children. In that era, she said, tragedy was seldom discussed with children. "Children's questions were met with silence, children's anxiety and fear with the same silence."

As a result, Crown Prince Carl Gustaf was seven years old before he had been told about his father's death. "It was Mother's way of handling the situation, to handle living her life. Of course it was not good for us children. It would have been much better to be able to speak about Father's death", continued Princess Birgitta. She said it had been difficult for the future King to come to grips with not having a father and of not having the same memories of him as his older sisters. 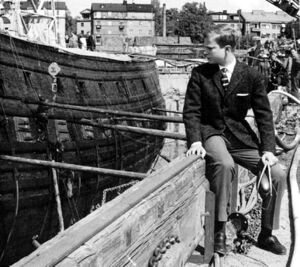 After graduating from high school, the Crown Prince completed two and a half years of education in the Royal Swedish Army, the Royal Swedish Navy, and the Royal Swedish Air Force. He received his commission as an officer in all three services in 1968, and he eventually rose to the rank of captain (in the army and air force) and lieutenant (in the navy), before he ascended to the throne. He has also completed his academic studies in history, sociology, political science, tax law, and economics at Uppsala University and Stockholm University.

To prepare for his role as the Head of State, Crown Prince Carl Gustaf followed a broad program of studies on the court system, social organizations and institutions, trade unions, and employers' associations. In addition, he closely studied the affairs of the Parliament of Sweden, Government, and Ministry for Foreign Affairs. The Crown Prince also spent time at the Swedish Mission to the United Nations and the Swedish International Development Cooperation Agency (SIDA), worked at a bank in London, at the Swedish Embassy in London, at the Swedish Chamber of Commerce in France, and at the Alfa Laval Company factory in France.

On 15 September 1973, Carl Gustaf became King of Sweden upon the death of his grandfather, King Gustaf VI Adolf. He was invested as King, at the Hall of State of the Royal Palace of Stockholm on 19 September 1973. King Gustaf VI Adolf was the last who used the style By the Grace of God King of the Swedes, the Goths/Geats and the Wends (Template:Lang-sv; Template:Lang-la). This traditional title had been in use since the establishment of the hereditary monarchy in 1544. Carl XVI Gustaf instead chose the plain and simple title King of Sweden (Template:Lang-sv), thereby ending a tradition centuries old.[2]

Such innovations are reflected in his personal motto, "For Sweden – With the times"[3] (Template:Lang-sv).[4]

In 2005, King Carl Gustav made a personal and passionate speech about the 2004 Indian Ocean tsunami, a disaster which caused the death of over 500 Swedes in that area, in addition to tens of thousands of more people.

In the 16th century, Johannes Magnus construed a mythical line of Swedish kings, beginning with Magog, the son of Japheth, in an attempt to substantiate the antiquity of the Swedish throne. Based on that list, King Charles IX (reigned 1604 to 1611) adopted an exaggerated ordinal much higher than that warranted by any reliable historical accounting. Consequently, previous monarchs named Charles (Karl) have traditionally been numbered by counting backwards from Charles IX, though there only were two before him. Thus the current King of Sweden was proclaimed as Carl XVI Gustaf (sometimes counted in English also as "Charles XVI", though he is never called that) even though he is only the tenth historical Swedish king named Carl (Karl, or Charles).[5] 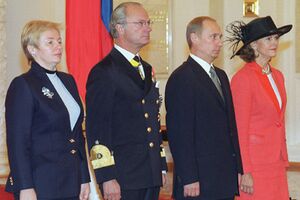 The King and Queen of Sweden welcomed at the Kremlin by President Vladimir Putin of the Russian Federation and Mrs. Putin at the start of the King's State Visit to Russia, 8 October 2001.

The King's duties are, according to the 1974 Instrument of Government, only of a representative and ceremonial nature. The 1974 document stripped the King of most of his formal political powers while retaining him as head of state, thus codifying actual practices dating from the definitive establishment of parliamentary government in 1917.

He pays State Visits abroad and receives those to Sweden, opens the Annual Session of the Parliament, chairs the Special Council held during a change of Government, holds regular Information Councils with the Prime Minister & the Cabinet, chairs the meetings of the Foreign Affairs Council, and receives and signs Letters of Credence of foreign ambassadors to Sweden and signs those of Sweden to foreign nations. As this type of figurehead, he also voluntarily abstains from voting in Swedish elections.[6]

King Carl Gustav (ceremonially) holds the highest ranks in the three branches of the Swedish Armed Forces; this is due to the fact that he was, as stipulated by the 1809 Instrument of Government in effect at the time of his accession to the throne in 1973, the Commander in Chief of the armed forces of Sweden (§ 14) and therefore he was promoted ex officio from his earlier ranks of captain and lieutenant, to general and admiral. Under the provisions of the Instrument of Government of 1974, which became effective on 1 January 1975, King Carl Gustav no longer holds this constitutionally-mandated position of commander-in-chief, but he kept his ranks à la suite since he no longer has any military command authority, except over his military staff at his court.

Worldwide, Carl XVI Gustaf is probably best known as the presenter of the Nobel Prizes each year. He also hands over the Polar Music Prize. The King holds honorary doctoral degrees from the Swedish University of Agricultural Sciences, the Royal Institute of Technology, the Stockholm School of Economics and from the Åbo Akademi University in Finland.

The King is passionate about the environment, technology, agriculture, trade, and industry.

Like many members of the Royal Family, the King has a keen interest in automobiles. He owns several Porsche 911s — a car model which is said to be a particular favourite of the King — as well as a vintage Volvo PV444, a Ferrari 456M GT, an authentic AC Cobra and other cars.[7] The first pictures taken of him and his future wife were of them sitting in his Porsche 911. In the summer of 2005 he was involved in a traffic accident in Norrköping. The accident was described as a "fender bender", with no serious personal injuries claimed. Nevertheless, the incident caused national headlines.[8]

The King is the Honorary Chairman of the World Scout Foundation, and often participates in Scout activities both in Sweden and abroad. He regularly visits World Scout Jamborees, for instance the 1979 Dalajamb World Jamboree International Encampment hosted by Sweden, the 2002 World Jamboree held in Sattahip, Thailand, and the 100th Anniversary of World Scouting 2007 World Jamboree held in Hylands Park, England.[9] He also attended the 1981 National Scout Jamboree in Virginia, United States, and was awarded the Bronze Wolf, the only distinction of the World Organization of the Scout Movement, awarded by the World Scout Committee for exceptional services to world Scouting, in 1982. He also attended the 22nd World Scout Jamboree. He gave a speech on 6 August at the closing ceremony with more than 40,000 people watching. The band Europe also performed for him singing "The Final Countdown".

The King attended the Sweden-Michigan Clean Energy Summit at the Ritz-Carlton Hotel in Dearborn, Michigan, on 26 September 2008, at the start of a two-day visit to Michigan. He also traveled to Kettering University in Flint, Michigan, for the ceremonial groundbreaking for a biogas plant that will be, when completed, similar to a biogas plant in Linköping, Sweden. On the second day of his visit he toured the test tracks of the Ford Motor Company and General Motors Corporation, then owners of Volvo and Saab respectively.[10] 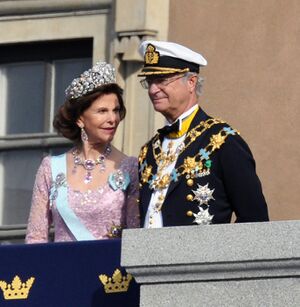 The King married Silvia Sommerlath, whose father was German and whose mother was Brazilian, and who had grown up in both countries. They met at the 1972 Summer Olympics in Munich, where she was an interpreter and hostess. The wedding was held on 19 June 1976, at the Stockholm Cathedral, and the ceremony was performed by the Archbishop of Uppsala, Olof Sundby. The wedding was preceded, the evening before, by a Royal Variety Performance, where the Swedish musical group ABBA performed Dancing Queen for the very first time, as a tribute to Sweden's Queen to be.[11][12] The King and his family moved to Drottningholm Palace west of Stockholm in 1980. He and the Queen have maintained their business offices at the Royal Palace of Stockholm.

Prince Carl Philip was born the heir apparent. However, a Constitutional reform, which was already under way at the time of his birth, made his older sister, Victoria, the heiress-apparent and Crown Princess of Sweden on 1 January 1980, according to the principles of absolute primogeniture, which Sweden was the first recognized monarchy to adopt.[13] King Carl Gustaf objected, not to the restored female succession but to the fact that his son lost the position and title of Crown Prince of Sweden which he had had since birth.[14]

For many years, it was widely reported that King Carl Gustav had dyslexia. Journalists noted that he misspelled his name when signing his accession document, and in 1973, while visiting a copper mine in Falun, he misspelled his name as "Cal Gustf" when signing it on a rock wall. In an interview on Swedish television in 1997, this condition was admitted publicly when his wife addressed the issue. "When he was little, people did not pay attention to the problem," she said. "He didn't get the help he needed." She also noted that the couple's children have "a bit of" dyslexia themselves.

On his creation as Duke of Jämtland, Carl XVI Gustaf was granted an achievement of arms which featured the arms of Jämtland in base (these arms can be seen on his stallplate as knight of the Danish Order of the Elephant at Frederiksborg Palace). Since his accession to the throne, he has used the greater coat of arms of Sweden.

The King is related to all current European reigning monarchs (at least through John William Friso, Prince of Orange, the most recent common ancestor of today's reigning European royal houses):

Template:Monarchs of Sweden Template:Heads of state of the European Union Member states