This page is nominated for deletion

One or more users of ScoutWiki have decided that this page should be deleted.

The administrators of ScoutWiki will delete this page within several days. If you think you can improve it in such a way that it can stay,
don't hesitate and give it a try! Please remove the "delete" template afterwards.

For other uses, see Camping (disambiguation).

File:Car Camping .jpg
"Car camping" is camping in a tent, but nearby the car for easier access and for supply storage.

Camping is an outdoor recreational activity, in which the campers get away from civilization and enjoy nature by spending one or more nights at a campsite. They may use a tent, a primitive structure, a travel trailer or recreational vehicle, or no shelter at all. Camping is often restricted by law to designated sites in order to prevent campers from damaging the environment.

Camping describes a wide range of activities. Survivalist campers set off with little more than their boots, whereas recreational vehicle travelers arrive equipped with their own electricity, heat, and patio furniture. Camping may be an end unto itself, but often it is done in conjunction with other activities, such as hiking, swimming or fishing. It may be combined with hiking either as backpacking or as a series of day hikes from a central location.

Some people vacation in permanent camps with cabins and other facilities (such as hunting camps or children's summer camps), but a stay at such a camp is usually not considered 'camping'. The term camping (or the slightly sarcastic camping out) may also be applied to those who live outdoors out of necessity (as in the case of the homeless) or for people waiting overnight in very long lines (queues). It does not, however, apply to cultures whose technology does not include sophisticated dwellings. Camping may be referred to colloquially as roughing it. 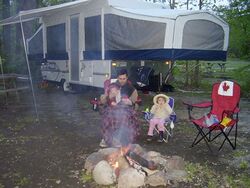 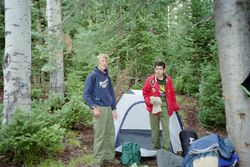 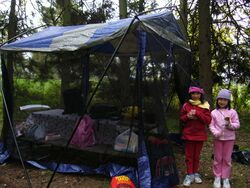 Kids having a go at tent camping: here, the tent is large enough to shelter a picnic table.

Campers span a broad range of ability and ruggedness, and campsites are designed accordingly. Many campgrounds have sites with special facilities such as fire rings, barbecue grills, bathrooms and utilities, but not all campsites have similar levels of development. Campsites can range from a bare piece of grass to a level, paved pad with sewer and electricity. These latter are often designated for the use of handicapped campers. For more on facilities, see the campsite article. Rugged campers believe that provisions for comfort detract from the experience of being out-of-doors, but comfortable camping avoids some hazards of outdoor activities.

The most comfortable form of camping uses recreational vehicles (RVs), essentially wheeled houses. Many RVs are quite luxurious, featuring air conditioning, bathrooms, kitchens, showers, satellite TV and even Internet connections. RV campers often choose these devices because they consider tent camping uncomfortable and inconvenient. In the United States, some campgrounds offer "full hookups" where motorhomes are supplied with electricity, water and sewer services. Some retirees and self-employed people sell their homes and live nomadically in their RVs, often moving with the seasons.

Those who seek a rugged experience in the outdoors prefer to camp with only tents, or no shelter at all ("under the stars"). Tent camping commonly employs an automobile to transport equipment to an established campground (this practice is called "car camping"). Other vehicles used for camping include touring bicycles, boats, and even bush planes, although backpacking and using pack animals are popular alternatives. Tent camping attracts young families because the children tend to enjoy it, and because gear is inexpensive and rugged. Tent camping sites often cost less than campsites with full amenities, and most allow direct access by car. Some "walk-in" sites lie a short walk away from the nearest road but do not require full backpacking equipment. 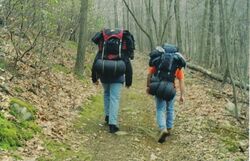 Backpacking is a mobile variety of tent camping. Backpackers use lightweight equipment that can be carried long distances on foot. They hike across the land, camping at remote spots, often selecting campsites at will if resource protection rules allow. Backpacking equipment typically costs more than that for car camping, but still far less than a trailer or motorhome, and backpacking campsites are generally free.

Canoe camping is similar to backpacking, but uses canoes for transportation; much more weight and bulk can be carried in a canoe or kayak than in a backpack. Canoe camping is common in eastern North America.

One form of bicycle touring combines camping with cycling. The bicycle is used to carry the gear and as the primary means of transportation, allowing greater distances to be covered than backpacking although less capacity for storage

Survivalist campers learn the skills needed to survive out-of-doors in any situation. This activity may require skills in obtaining food from the wild, emergency medical treatments, orienteering, and pioneering.

"Winter Camping" refers to the experience of camping outside when there is sufficient snow on the ground. Some campers enjoy the challenge this form of recreation brings. Campers and outdoorspeople have adapted their forms of camping and survival to suit extremely cold nights and limited mobility or evacuation. Methods of survival when winter camping include building snow shelters (quinzhees), dressing in "layers," staying dry, using low-temperature sleeping bags, and fueling the body with appropriate food.

In Finland many groups arrange "Winter Camps" in every winter.

Workamping allows campers to trade their labor for a free campsite, and sometimes for utilities and additional pay.

Some campers may prepare food by cooking on a campfire, sometimes using such equipment as a Dutch oven.

Much of the remaining needed camping equipment is commonly available in the home, like dishes, pots and pans. Lists of what to take are available in many camping books and websites. Many people opt not to use their home items but equipment better tailored to camping, such as heavy plastic tableware and salt and pepper shakers with tops that close to keep out rain. Backpackers use special lightweight and highly portable equipment. Template:Wiktionarypar

Many Campers enjoy socialising with a small group of fellow Campers. Such groups will arrange events throughout the year, to allow members with similar interests, or from similar geographical areas, to get together. This allows Families to form small close knit societies, and children form lasting friendships. Some who participate in this sort of camping, feels that it brings a closer form of bonding, as members become more mutually dependant, than they would otherwise be in modern society. There are 2 large organisations in the UK who facilitate this sort of camping, the Caravan Club, and the Camping and caravanning club. It is also possible to find online special Interest groups, who cater for those with a love of a particular passtime or sport.

In more recent years, those who camp alone have been able to share their experiences more easily with a large group of fellow campers, through the use of Blogs & online Social networking.