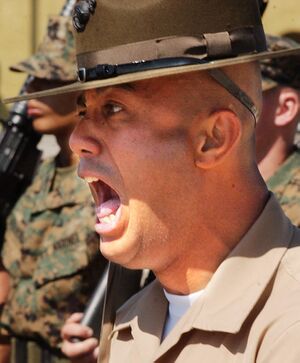 Up through the WWI era, the campaign hat worn by American soldiers was fairly soft and the brim was often curved or folded to the wearer's liking. By the 1930s the felt was made very stiff with a permanently flat brim. Around this time it was dubbed the "Montana Peak" design, referring to the pinched crown.

The hat worn by U.S. Army Drill Instructors is olive drab in color with a gold U.S. Army seal centered on the front. U.S. Marine Corps Drill Instructors wear similar hats with a subdued USMC emblem. Air Force Military Training Instructors (MTI) wear navy blue hats with the same insignia as their Army counterparts, only silver in color. Air Force MTI's who are qualified to teach new MTI's are identified by a black rope around the hat. MTI's in the top ten percent of their career field wear a light blue rope and are more likely to be referred to as "Blue Ropes" than MTI's.

In Canada the Stetson was the official dress hat of the Northwest Mounted Police (later Royal Canadian Mounted Police, who retained it as part of the full dress uniform) as well as Canadian cavalry units in the First World War. The hat was phased out of military use by the Service Dress Cap following the First World War. It also used by members of the Ontario Provincial Police.

Retrieved from "http://en.scoutwiki.org/index.php?title=Campaign_hat&oldid=41874"
Categories:
Cookies help us deliver our services. By using our services, you agree to our use of cookies.