From ScoutWiki, For Everyone, Everywhere involved with Scouting and Guiding...
Jump to navigation Jump to search
File:Yawgoog90th.jpg
Yawgoog's Entrance Sign in 2005.

Yawgoog Scout Reservation (usually shortened to Camp Yawgoog) is a 1800 acre reservation for Scouting located in Rockville, Rhode Island operated by the Narragansett Council. It has been operating for 91 years, 2007 will mark its 92st Season. It runs an eight-week summer camping program every summer where Boy Scouts from across the Northeast region and from across the country stay for a week with their troops. The Reservation is divided into three camps, Camps Three Point, Medicine Bow, and Sandy Beach. Generally, each camp offers the same programs and experiences, although scouts tend to be very gung-ho about their particular camp. Yawgoog serves thousands of scouts and scouters yearly. 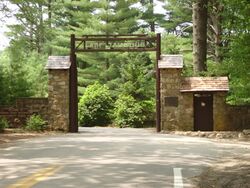 In 1916, Scout Executive Donald North, after inspecting some 20 lakes in Rhode Island, recommended the deserted Joseph Palmer farm property on Yawgoog Pond as a permanent reservation for Scouting. The 150 acre piece was leased to Rhode Island Boy Scouts (RIBS) in 1916, tried out, and purchased in 1917. Yawgoog and Wincheck, according to local tradition, were the names of two Narragansett Indian Chiefs. The water rights to the pond, named for Chief Yawgoog, were purchased in 1953 from the Yawgo Line and Twine Company. The reservation continues to be separately owned by the RIBS, even after their merger with BSA.

During a roundtable meeting in January 2007, it has been noted that flushable toilets are being installed, first at Medicine Bow, then Sandy Beach, and Three Point. Open pit Latrines have been the only form of toilets used at Yawgoog (except the Bucklin and the Nature Center).

Yawgoog is normally active during the summer for 8 weeks of operation. During the off season of Yawgoog, tent camping is done at Curtis Tract, Located in Sandy Beach. Cabin Camping is done in the four cabins near the Bucklin. This is usually available for troops who wish perform such outdoor events.

Each camp is capable of operating independently as each camp has a dining hall, a waterfront and a trading post. Each camp shares its program centers with the rest of the reservation, so scouts from Sandy Beach come to Three Point to earn nature merit badges at the Nature Center and scouts from Three Point go to Sandy Beach to participate in the Shooting Sports program. As a result the three camps' staff share a friendly rivalry throughout the summer and off-season. Each camp employs a Services Staff, a Kitchen Staff, a Cook, and an administration. The administration of the camp is usually comprised of the Camp Director, the Assistant Camp Director, and two program commissioners (three for Sandy Beach). They run the camp's program and services areas and answer to the Reservation Director, at present Mr. Thomas Sisson. Camp Songs Each camp has several songs which represents it to the other camps on the reservation. These songs are sung usually in respective dining halls during meals, although they can occur quite spontaneously anywhere on (and off) the reservation.

Camp Three Point, named after the three points of the scout oath, was the first of the three camps to be founded. It has been given the moniker as "The Oldest and Most Tradition-Filled Camp" on the reservation. Today, Camp Three Point encompasses the Challenge Course, the Bucklin Building, the Arthur Livingston Kelly Nature Center, The Three Point Waterfront, the first New Frontier Center on reservation, and the 407 Outfitters, the Reservation's largest Trading Post. It also is the home to the Memorial Bell Tower, which tolls at 12 p.m. daily. Three Point's camp color is green, usually of a dark hunter green character. Its Mascot is Danny the Deer, who "just hangs around" in the reservation's oldest dining hall, Sharpe Lodge, which was built in 1924. Three Point has the distinction of being the first camp founded, and can claim to have once been Yawgoog Scout Reservation in its entirety. Once again returning for his fourth summer as the Camp Director of The Point is Glenn Beeman. 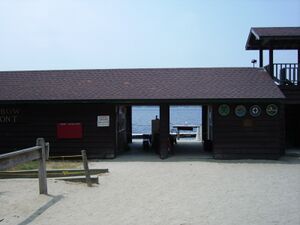 After the founding of Camp Three Point, the popularity of the reservation would grow to the point where a second camp was required. It was laid down in the mid to late 1920s, and would be named Medicine Bow. Built around Rathom Lodge, Medicine Bow today encompasses the center section of Yawgoog's developed land. It houses the following program centers: The Counselor-in-Training Corps, The Baden Powell provisional camp, The Crafts Center, the Medicine Bow Waterfront, The Ashaway Aquatics Center, a horizontal climbing wall, and the Health Lodge. Medicine Bow also generally houses the staff from Reservation Services, who bring food to the camps and take care of the camp's business happenings. It is also home to the reservation's active motorboat, the Charlie Brown which patrols the pond for capsized boats. The Charlie Brown is docked at Ashaway Aquatics Center also the home of the Yawgoog Yacht Club. Medicine Bow's color is red, usually in a fire engine color. MB's mascot is Elmo the Elk who presides over Rathom Lodge during meals. Additionally, two wooden Roosters grace the entrance to Medicine Bow. Camp Medicine Bow's nickname is, "The Heart of Yawgoog", or "the cream between the two oreo cookies." The Camp Director for the 2007 season is Chris Hawrlick.

Located somewhat to the North of Medicine Bow lies Camp Sandy Beach. It was built in the mid-1930s around Metcalf Hall. Today, Sandy Beach calls itself the "Youngest and most Spirited camp" as well as "the Powerhouse of Yawgoog." Sandy Beach maintains the following program areas: The Lane Bliven Rifle Range, The Archery Range, The Trap Range (all under the direction of the Shooting Sports department,) Campcraft, Beach Frontier (the second and final incarnation of the New Frontier program to date) the Sandy Beach Waterfront, and The Scoutmaster Essentials Program. Sandy Beach's color is blue, and their mascot is Jim the Moose, who lords over Metcalf Lodge during meals. The camp is also home to 5 other mascots: a beaver, two bananas Jake and Elwood, and one "crazy" crocodile. Sandy Beach also generally has the largest number of scouts to serve, as the camp's capacity for scouts is greater than the other two. Sandy Beach also houses the Reservation Baker, who works in the Bake Shoppe which is attached to the kitchen. Back for his second year as Camp Director of the Beach is James Turco.

Each camp has a particular manner of naming their campsites. Note that there are aberrations in the naming scheme, especially in Three Point, where there was no set guideline as to what the names would be, therefore they are generally erratic and follow only a general pattern.

Medicine Bow:
Native American derived names, with the exception of Baden-Powell Provisional Camp and Campsite Dan Boone, which were acquired from Sandy Beach several years ago, when the waterfront became the end of the camps: Baden-Powell (aka Sequan), Cautantowit, Dan Boone, Manchose, Manitoo, Minnikesu (CIT Corps), Netop, Neimpaug, Waskecke, Weemat, Wetuomuck, Wunegin, Wuttah. Occasionally, if Sandy Beach is full to the brim, campsite Abe Lincoln becomes a Medicine Bow campsite for the week and is given the name Yotannit.

Donald North Court: Donald North Court is the direct grounds surrounding the east side of the Bucklin Memorial (across the road is the Tim O'Neil Field where the Sunday dress parade happens) These grounds are named after the scout executive Donald North. The grass court is surrounded by the 407 outfitters building (North side) 4 Cabins on the south, and beyond that, the Challenge Center.

Bucklin Memorial: The Bucklin Memorial, named after Cpt. George Bucklin is replica of the Royal Canadian Mounted Police Barracks. Most administration work is done in here. This building is under Three Point Jurisdiction. On the first level, the southern side houses the off season camp master's quarter's as well as a kitchen and very small dining hall, while on the northern face bathrooms with flush toilets and showers. The second floor holds the administration offices on the north side, while the south has a meeting hall.

Yawgoog Heritage Center: Yawgoog Heritage Center (YHC) was opened in 2003 to replace the old museum located in the Bucklin Building, built from the old trading post, which now sits in front of the Museum on the same pavilion. It contains artifacts from throughout Yawgoog's history and offers scouts and scouters a look at the history of the camp.

Dining Hall: Scout receive three meals a day at their camp's respective dining halls. These places can be considered a social gather place as scouts of different patrols eat together as well as rotating adult leaders with these groups. In the morning and at night, the flag raising/lowering is done before troops are allowed into the dining halls. Scout spirit can be considered high during meals as troops sing songs and cheer cheers.

Waterfront: Each Camp has a fully functional Waterfront. The waterfronts have three swimming zones; 0-3 feet, 3-7 feet, 7-12 feet (non-swimmer, beginner and swimmer respectfully). There are also a rowboat and canoe launch for Yawgoog boats. Scouts and Adult leaders on Monday do a swimmers test to test their abilities.

Merit Badges/ Awards: There are 4 merit badges taught at the waterfronts, 2 of which are required for Eagle Scout. There are also three other awards.

The A. Livingston Kelley Environmental Education Center was built in 1983 following a sizable donation on behalf of Arthur Livingston Kelley and the sale of the Kelgrant Camping Area. The KEEC, as it is more commonly referred to, houses the Nature Center. The south face looks out onto Tim O'Neil field. 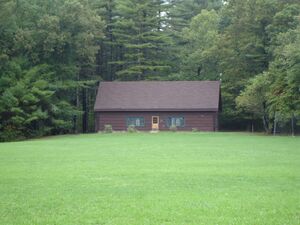 Merit Badges: The KEEC offers 11 different merit badges relating in one way or another to Nature and Ecology. Of the 11, only one, Environmental Science, is Eagle required.

Heating System: The building itself was constructed to utilize heat energy from the sun to keep the building warm. Photothermal panels were installed on the roof to collect that energy and heat air inside the attic of the KEEC. Eventually, the KEEC's heating system was deemed cost-ineffective, and was shut down.

There are many things that can be done at Yawgoog, in order to recognize most of these activities, segments are given out. Segments are little curved rectangular patches which go around the Yawgoog patch on a circular piece of felt (the color can be of personal preference). This can hold up to 3/4 rows (some people who have more segments than space can handle sew on additional fabric).
Campsites

CY’s CY's are segments geared toward recongition of youth leadership at Yawgoog.