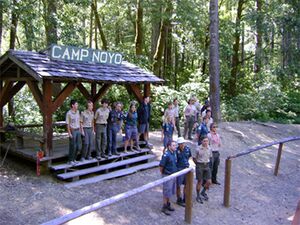 Camp Noyo is a traditional BSA camp leased by the Redwood Empire Council during select periods. Camp Noyo is located on the Noyo River between Fort Bragg and Willits on Mile 16 of the California Western Railway.

The clear blue waters and the tall redwood trees make Noyo the picture perfect camping location for any Scout unit. Camp Noyo was first used for Boy Scout Summer Camp from 1933 until 1955. It was then used in the 1970s as an outpost camp, and reopened for Scouts BSA Summer Camp again in 2008.

Camp Noyo has the capacity for 100 campers and 20 staff members, making it a very small camp. Its smaller camp size offers a more intimate family-style experience different from what units experience at larger BSA council camps.

Smaller badge sessions means that virtually every Scout gets to participate in the badge sessions he/she wants. Our all-volunteer staff works hard to help units enjoy the experience, and will assist units in ways not normally available at larger camps. If your unit’s request is possible to do at camp, we will do our best to fulfill that request.

While Camp Noyo is an extremely remote camp, it does have a modern shower house and toilet facilities (with hot water provided by wood burning boilers), a trading post, and various program areas. The camp has a superb balance between a rustic back country feel and a comforting front country feel making it perfect for the new and experienced camper alike. 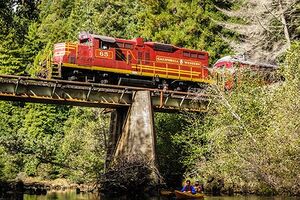 Camp Noyo will be open for Scouts BSA Summer Camp in two July sessions. Camp Noyo will have traditional merit badges as well as merit badges offered at few other camps. Most meals will be prepared "jamboree-style" by troops in campsites. Scenic "Skunk" train ride from Willits into camp and back out on Saturday included in camp fee!

Camp Noyo is open to unit camping (packs, troops, crews, and ships), under their own leadership, from the weekend following Labor Day until the last weekend in October and from the first weekend in March through the weekend before Memorial Day.

Your adventure begins with a ride into Camp on the famous Skunk Train (departs Willits at 10:00 a.m.). Upon arrival in camp about an hour and a half later, you will go to your favorite campsite equipped with tables, fire rings, food lockers, running water and toilets. Although the summer dam does not go in until June 15 and is removed on September 15 there is still ample water in the river for swimming, canoeing and kayaking. (All equipment supplied). Hiking trails, horseshoe pits, and a large campfire bowl add to the fun.

As this is a remote area with no phones, camp ranger or year around roads, units should understand that fact prior to reserving a visit. The train departs back to Willits at 12:45 for your return. Two week advance reservations with deposit are required, and out of council units are also welcome.

This district is part of Redwood Empire Council, headquartered in Santa Rosa, CA. They serve Scouting members in Sonoma and Mendocino Counties of Northern California. It is a local council (#041) of the Boy Scouts of America. All youth are invited to join scouting.

Retrieved from "http://en.scoutwiki.org/index.php?title=Camp_Noyo&oldid=47496"
Categories:
Cookies help us deliver our services. By using our services, you agree to our use of cookies.