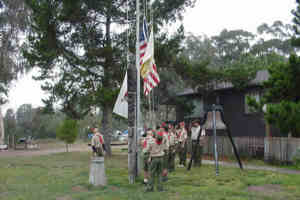 This campground is located in the heart of San Diego, making it convenient to access many downtown venues during the day including Harbor Tours, USS Midway Museum, Old Town San Diego SHP, San Diego Zoo and many more.

Camp Balboa lies nestled in the northwest corner of beautiful Balboa Park. Encompassing approximately 15 1/2 acres, and just a short walk from the World Famous San Diego Zoo, the camp boasts a year around program for Tiger Cubs all the way up to adult leader training.

Located behind the Council Service Center, the camp has nine campsites, and enough room for 300 campers. Each has its own campfire ring, and picnic tables.

There is also a recreational size swimming pool, a patio and a picnic area with brick Bar-B-Q's. The camp also boasts an amphitheater for those good 'ole raucous campfires and sing alongs held under the beautiful San Diego sky.

There are three easy hiking trails that depart from Camp Balboa and wander into Balboa Park passing many of the parks great landmarks and scenery.

This district is part of The San Diego-Imperial Council, headquartered in San Diego, California, and serves youth members and volunteer leaders through Scout units in San Diego and Imperial counties of Southern California, as well as a small portion of Southwest Arizona. It is a local council (#049) of the Boy Scouts of America. All youth are invited to join scouting.

Retrieved from "http://en.scoutwiki.org/index.php?title=Camp_Balboa&oldid=47596"
Categories:
Cookies help us deliver our services. By using our services, you agree to our use of cookies.