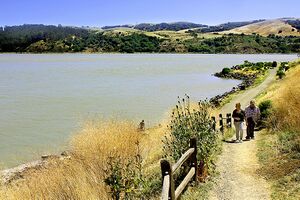 San Francisco Bay Trail, a planned 500-mile walking and cycling path around the entire San Francisco Bay running through all nine California Bay Area counties, 47 cities, and across seven toll bridges. With over 350 miles in place, the Bay Trail connects communities to parks, open spaces, schools, transit and to each other, and also provides a great alternative commute corridor. The ultimate goal of the Bay Trail is to build a continuous shoreline bicycle and pedestrian path for all to enjoy.

The San Francisco Bay Trail is a bicycle and pedestrian trail that will eventually allow continuous travel around the shoreline of San Francisco Bay. As of 2018, 354 miles (570 km) of trail have been completed. When finished, the Bay Trail will extend over 500 miles (805 km) to link the shoreline of nine counties, passing through 47 cities and crossing seven toll bridges.

It provides recreational opportunities for hikers and bicyclists; offers a setting for wildlife viewing and environmental education; and serves as a bicycle transportation corridor. The Bay Trail provides access to points of historic, natural and cultural interest, and to numerous recreational areas, including over 130 parks. The Bay Trail consists of paved paths, gravel trails, bike lanes or sidewalks.

Because the trail circumnavigates the entire San Francisco Bay, a wide variety of landscapes and experiences can be found. For a bustling scene, walk or bike the Embarcadero in San Francisco on a sunny (or foggy) afternoon. For peace and solitude interrupted only by bird song and windswept grasses, make your way to the Tubbs Island Trail on the shores of San Pablo Bay in Sonoma County. Nearly 227 miles of the existing Bay Trail are paved, and 127 miles are natural surface trails of varying widths. In some locations, the Bay Trail consists of bike lanes and sidewalks. In addition to walkers and cyclists, the trail is used by joggers, skaters, birdwatchers, photographers, kite-flyers, wheelchair riders, picnickers, and more.

The Bay Trail is an interconnected trail system that links parks, open spaces, points of interest, and communities on or near the bay shoreline. It will not only encircle the Bay but will also provide access inland to open spaces and preserves, streams, and the Bay Area Ridge Trail, which forms the second of two concentric rings around the bay.

Bicycle and pedestrian pathways exist on five Bay Area toll bridges: Golden Gate Bridge, Carquinez Bridge, Benicia-Martinez Bridge, Dumbarton Bridge and the East Span of the Bay Bridge. A bicycle-pedestrian pathway will open on the upper deck of the Richmond-San Rafael Bridge by the end of 2018. 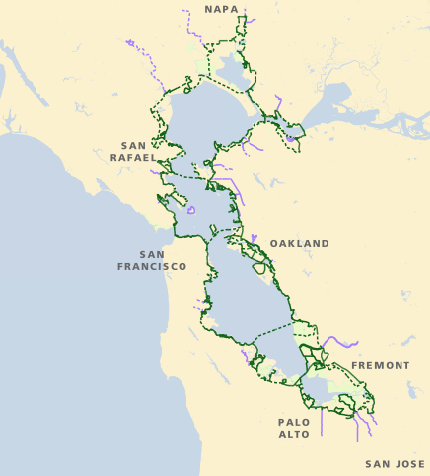 Retrieved from "http://en.scoutwiki.org/index.php?title=Bay_Area_Trail_System&oldid=43198"
Categories:
Cookies help us deliver our services. By using our services, you agree to our use of cookies.