Dr. Kourkène Medzadourian, Chief Scout of Armenia, moved to France, where troops of Armenian Scouts were established in large cities.

In 1929, World Scouting recognized the association of Armenian Scouts Haï Ari, based in France. While the Association did not have its own territorial base, it was the exception to the rule, remaining a member of the World Organization and the European Scout Region.

In April 1939, J. S. Wilson paid a visit in Paris for the tenth anniversary of the recognition of the Association of Armenian Scouts.

At its meeting in 1945, the International Committee considered the standing of the two non-territorial NSOs, the Association des Scouts Armeniens and the Association Nationale des Scouts Russes. It was proved that the Armenian organization was very much alive, and that it had members in various countries, some of whom could not be recognized as Scouts without the existence of the Armenian organization. The same did not appear to be the case with the Russian Scouts, whose membership had dwindled and seemed to be confined to DP camps. The Committee felt that the continued registration of the Association Nationale des Scouts Russes was not justified. The policy adopted in 1947 and reaffirmed in 1949 remained as it was until 1957, when the Committee decided to reconsider the whole question of policy in view of changed conditions. 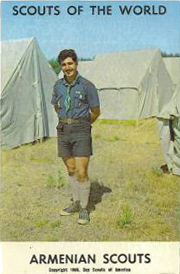 The Scout emblem incorporated the national colors as well as Mount Ararat, also an element of the coat of arms of Armenia.