L'Association des Scouts du Canada (ASC) is a World Organization of the Scout Movement member along with Scouts Canada in Canada. It is a unique situation, Canada being the only country having two membership in the WOSM.

This was desired by Baden-Powell himself, who signed an agreement called Ensemble-Together with the two Canadian national scout association in 1935.

The reason for this was simple. At the time, the Association des Scouts du Canada was exclusively offer its services to French-speaking Catholics, while Scouts Canada should focus on the english-speaking and Protestant.

Today, the two National Scout Organizations are always independent: Boards are independent and their staff are completely separate from each other. The clients of both association have evolved since that time, they are now multicultural. The service offering and philosophy both NSOs have also evolved over time, the ASC is being permanently removed the aspect of "military" from scouting and favoring development projects oriented full development of the individual.

The very first Canadian unit was founded in 1908 in Saint Catharines, Ontario. In 1925, a Longueuil teacher called Georges-Henri Sainte-Marie started his own unit in the Saint-Antoine de Longueuil parish and decided not to affiliate with the Boy Scouts. In 1928 a group of five troops located in Montreal created their association, the Fédération des catholiques des Éclaireurs canadiens-français. The ASC is created in 1961 and in 1975 three new federation are created in Ontario, Atlantic and West.

In 1965, the Association began major reforms that will shape the Scouting today. In 1966 it created the branch Pionniers for scouts between 14 and 17 years of age. This initiative marks the introduction of a method that will gradually be applied to all branches.

in 1966, the national scarf blue and yellow was adopted.

In the mid-70s to present an interlocutor Quebec provincial government, ASC decided to initiate a process of decentralization will lead to the creation of four regional federations: Quebec, Ontario, West and the Maritimes. Several services, programs and responsibilities will be transferred to the federations.

From September 1991, all units can be mixed.

In June 1994, the Association des Guides Francophones du Canada (Canadian French speaking Guides association) voted against a new protocol from the Girl Guides of Canada which asked for the return to female-only leaders and management, getting rid of almost 60% of the adults simply because they were men. In August of the same year the AGFC recommended to his members to go with the ASC and in October it became official. Since then French speaking Girl Guides are pretty much non existent.

In October 2004 the four federations where dissolved and the 40 districts are now under the direct responsibility of the ASC.

In 2012, program from differents branchs has been renewed and the uniform which will come in September 2013.

With a general decline in members in Canada, some districts have become heavy for the system. The ASC has recommended the merger of the districts. Several agreements have been negotiated merger and adopted during the year 2012. There would be only 10 districts across the country. [1]

They have 8 different programs:

Each one of these use a precise program. The number of youth per unit varies from 5 to 30 youth and adults, 1 adult per 5 to 8 youth, depending on their age. There are unisex units as well as mixed units. When a unit is a female only one, they can either use a girls-only program or the boys one.

The association was built on the Catholic religion, but Canada being a multicultural country, their official stance on religion is left to each individual unit to the point where some Muslim group are part of the ASC and proud of it.

Though the association have units in every province, a large amount of members are located in the province of Quebec, the biggest district being Montreal.

No matter which association, in Canada there is only one official colors for the neckerchief, which is blue with a yellow border. ASC authorise units to have their own colors, to be used in every activity except the national and international one. 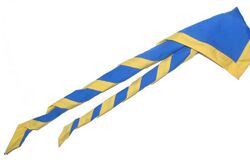 Uniforms are not the same than Scouts Canada. Except for beaver, which have a yellow t-shirt, all uniforms consist of a colored shirt (the color depending on the age of the youth), a beige-khaki pant, a neckerchief and a leather belt. The color of the shirt is yellow for the 7-8 years old, green for the 9-11 years old, blue for the 12-14 years old, red for the 15-18 years old and pale gray for the 18-25 years old. For the scout leaders, they wear the same color as the youth they are with. Since both girls and boys wear the same uniform, the only way to know which program they are under is by looking at their badges, which are quite different.

There are three functions served by adults in the association. Even as adults, members may progress and receive awards.

Monitors are those who actually have contact with the youth. They organize activities following the VCPREF method as suggested by the ASC. Their mission is to assist the youth in developing their physical, spiritual, intellectual, social and affective potential. The awards are the Gilwell knot (Noeud de Gilwell) and the Wood Badge (Badge de bois).

These adults are living toolboxes for monitors and provide them with appropriate training.

Retrieved from "http://en.scoutwiki.org/index.php?title=Association_des_Scouts_du_Canada&oldid=36010"
Categories:
Cookies help us deliver our services. By using our services, you agree to our use of cookies.