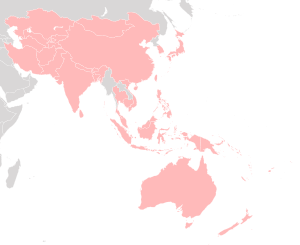 Jurisdiction of the WAGGGS-Asia Pacific Region; the countries with no Guiding organization, and those outside the Region, are in grey

All the formerly communist states of Central Asia and the Soviet Union have developed or are developing Guiding in the wake of the renaissance in the region. For several years, communism repressed Guiding in Afghanistan, where it has newly returned, as well as in Mongolia, which had been the first Soviet satellite state since 1924.

The year in the 'date joined' column refers to the year the organisation was granted membership to the Asia Pacific Region of WAGGGS, not the year Guiding started in that country.

This article is a stub. You can help ScoutWiki by expanding it.

Retrieved from "http://en.scoutwiki.org/index.php?title=Asia_Pacific_Region_(World_Association_of_Girl_Guides_and_Girl_Scouts)&oldid=34272"
Categories:
Cookies help us deliver our services. By using our services, you agree to our use of cookies.