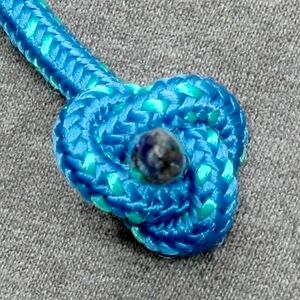 The load-bearing face of an Ashley's stopper knot. This particular example was tied in an unusual manner, with the "standing part" very short, to fully expose the knot's Trefoil-like face.

Ashley's stopper knot, also known as the Oysterman's stopper, is a knot developed by Clifford W. Ashley around 1910. It makes a well-balanced trefoil-faced stopper at the end of the rope, giving greater resistance to pulling through an opening than other common stoppers. Essentially, the knot is a common Overhand noose, but with the end of the rope passing through the noose eye, which closes upon it.

Ashley developed this knot in trying to duplicate a knot he saw on a boat in a local oyster fishing fleet. When he had a chance to observe the knot up close at a later time he realized it was just a badly water-swollen figure eight stopper knot.

Retrieved from "http://en.scoutwiki.org/index.php?title=Ashley%27s_stopper_knot&oldid=28551"
Categories:
Cookies help us deliver our services. By using our services, you agree to our use of cookies.