The Alameda Council is a local council (#022) of the Boy Scouts of America located in the state of California. It consists of the territory of the city of Alameda, and the council itself is a membership of 20 chartered organizations along with council members-at-large. Chartered in January 1917 and incorporated in April 1926, Alameda Council BSA is the largest youth-serving non-profit organization in the city of Alameda, serving over 1,000 youth in traditional programs, plus over 500 youth in Exploring posts and Learning for Life groups. 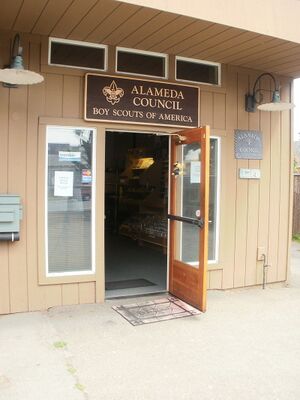 Alameda Council was organized in December 1916, and chartered by BSA in January 1917, with 7 Boy Scout troops organized in the first few months. Since then, we have added Sea Scout ships in the 1920's, Cub Scout packs in the 1930's, Explorer posts in the 1940's, Varsity Scout teams in the 1980's, and Venturing crews and Learning for Life groups in the 1990's. Because most Venturing crews, Sea Scout ships, Explorer posts, and Learning for Life groups are co-educational, we are pleased to include over 300 girls among more than 1,000 youth we serve annually.

Alameda Council is one of the seven smallest Boy Scout councils in the United States, serving youth in the city of Alameda. It was first organized in December 1916, shortly after the organization of BSA councils in Berkeley and Oakland, making it the third oldest BSA council in Northern California. It is one of six BSA councils that serve the San Francisco Bay area.

All Scout units are located in the city of Alameda unless otherwise noted. For more information visit the Council Roundtable.

Cub Scouts holds weekly activities for youth ages 6-10. Contact either the unit or it's sponsor to get more information back in 72 hours.

Boy Scouts Weekly meetings / monthly outtings / annual summer adventure trips. Scouting builds life and leadership skills for boys ages 11-17. Contact either the unit or it's sponsor to get more information back in 72 hours.

Venturing hold weekly activities for youth ages 14-20. Most units are co-ed and have a venturing theme. Contact either the unit or it's sponsor to get more information back in 72 hours.

Exploring Posts hold weekly activities for youth ages 14-20. Most units are co-ed and have a venturing theme. Contact either the unit or it's sponsor to get more information back in 72 hours.

Currently this council operates no scout camps of its own. See Scouting in California for Regional Scout Camp information.

Kaweah Lodge 379 - Order of the Arrow - Brotherhood of Cheerful Service:

Kaweah Lodge 379, Order of the Arrow, was chartered to the Alameda Council in February 1948, and has served local Scouting continuously over the past 68 years. Our lodge consists of over 80 youth and adult Arrowmen cheerfully serving Scouting and the Alameda community.

Retrieved from "http://en.scoutwiki.org/index.php?title=Alameda_Council&oldid=47052"
Categories:
Cookies help us deliver our services. By using our services, you agree to our use of cookies.