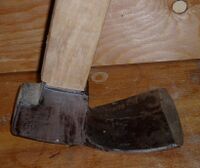 The tool known as the adze (adz in US) (IPA: Template:IPA) serves for smoothing rough-cut wood in hand woodworking. Generally, the user stands astride a board or log and swings the adze downwards towards their feet, chipping off a piece of wood, and walking backwards as they go, leaving a relatively smooth surface behind. However, in general usage, the adze can be used for other cutting operations.

The head of the adze is oriented to the haft like a hoe, or plane, and not like an axe, whose cutting blade would be perpendicular to the blade of an adze.

In central Europe, adzes made by knapping flint are known from the late Mesolithic onwards ("Scheibenbeile"). Polished adzes and axes made of ground stone, like amphibolite, basalt or Jadeite are typical for the Neolithic period. Shoe-last adzes or celts, named for their typical shape, are found in the Linearbandkeramic and Rössen cultures of the early Neolithic. Adzes were also made and used by prehistoric southeast Asian cultures, especially in the Mekong River basin.

The adze is shown in Egypt, from wall relief scenes from the Old Kingdom onward (about 3000 BC). It is also used as a hieroglyph, and from the 19th Dynasty onward was used in the names of various pharaohs. Examples of the Egyptian adze can be found in museums.

Prehistoric Māori adzes from New Zealand, used for wood carving, were made from nephrite, also known as jade. At the same time on Henderson Island, a small atoll in Polynesia lacking any rock other than limestone, natives fashioned giant clamshells into adzes.

More modern adzes are made from steel with wooden handles, and some people still use them extensively: occasionally those in semi-industrial areas, but particularly 'revivalists' such as those who exist at the Colonial Williamsburg cultural center in Virginia, USA. However, the traditional adze has largely been replaced by the sawmill and the powered-plane, at least in industrialized cultures. It remains in use for some specialist crafts, for example by coopers. Adzes are also in current use by artists such as American and Canadian Indian sculptors doing large pole work.

Retrieved from "http://en.scoutwiki.org/index.php?title=Adze&oldid=34288"
Categories:
Cookies help us deliver our services. By using our services, you agree to our use of cookies.